So, let me start with a little backstory. I'm picking up the reins on a project that was started by my cousin 20+ years ago.  This 1956 r69 frame and boxes of parts was bought along with another BMW by my cousin sometime in the 90s. He knew this was a rare and desirable bike, and always had intention to build it. But, life (and to be honest, at least a dozen or more other motorcycles) happened and as he's in his 70s now he decided to pass it along to me as we have done lots of projects together. As for me, I've been working on vintage bikes as a hobby almost 20 years. I've done overhauls and work on Hondas, Triumphs, Harleys + more, and 2 of my cooler more custom builds have been featured in several bike shows around Austin Texas. In fact, I help organize an annual bike event here called the East Side Classic - now in its 11th year.

Just adding that preamble to share a little about me. Now let's talk about this bike, which is what you really care about.

As mentioned, this is a 1956 r69 frame. The motor it turns out, is a 1960 r69. This was verified by the BMW Group in Germany, and both bikes were imported by Butler & Smith. After that, who knows what happened as it was already in parts when my cousin acquired it. When I got it, the bike came with 2 transmissions, 2 tanks, lots of parts, and in combing through the pile a few other odds & ends I'll discuss in more detail later. My 1st order of business was to do an inventory and assess where we were. Because I do this in my spare time, and had a lot to learn, I spent over a year doing this... finding manuals, researching exploded parts diagrams, translating part #s at times, reading a million things online, and learning a lot from anyone who was nice enough to discuss it with me. During the course of this inventory, I (sort of) assembled the bike in "as found" condition. Brace yourself. 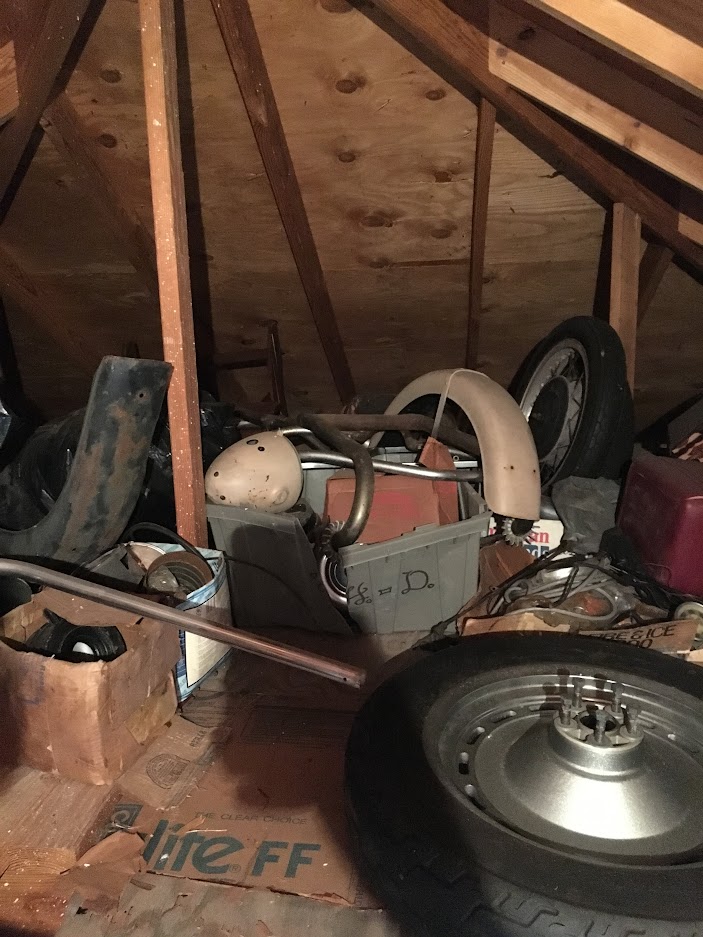 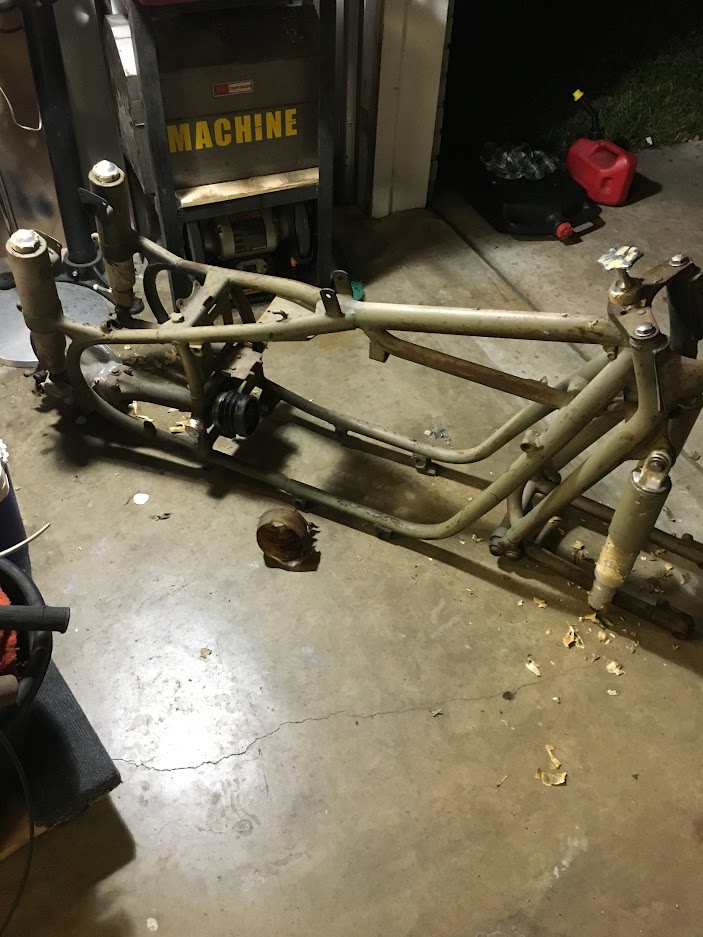 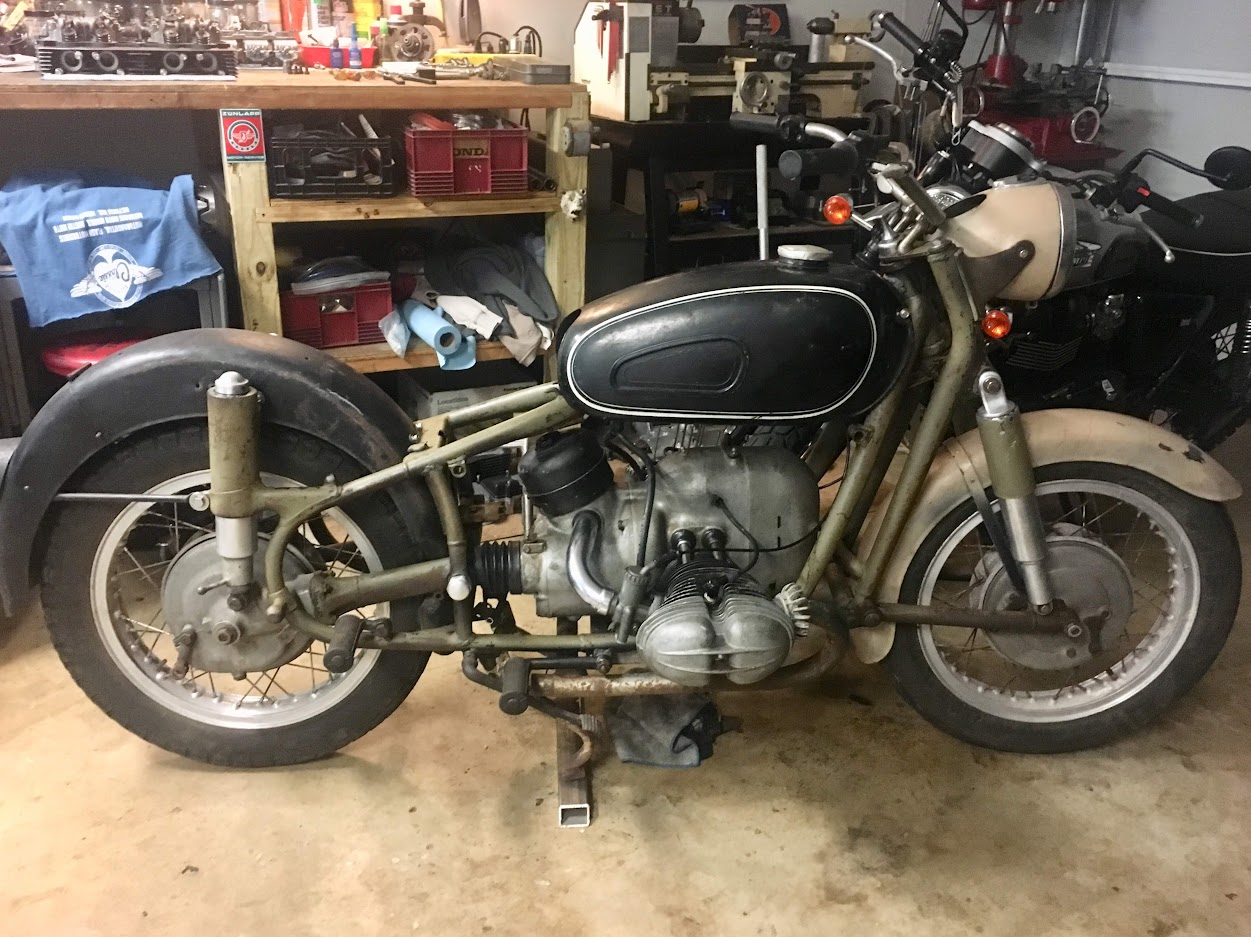 1st of all, I know the headlight ears are upside down. I know these are not stock handlebars. Wrong tail light - I get it. Like I said, "as found". The bike has been painted no less than 3 times. It was black at the base - then went what looks like olive drab, then, perhaps most painfully, some kind of half-assed slapped on light brown. Not surprisingly though - the thing still looks kinda awesome. I rolled it out to show it off at our bike show in while it was in this state. Not a bad start... 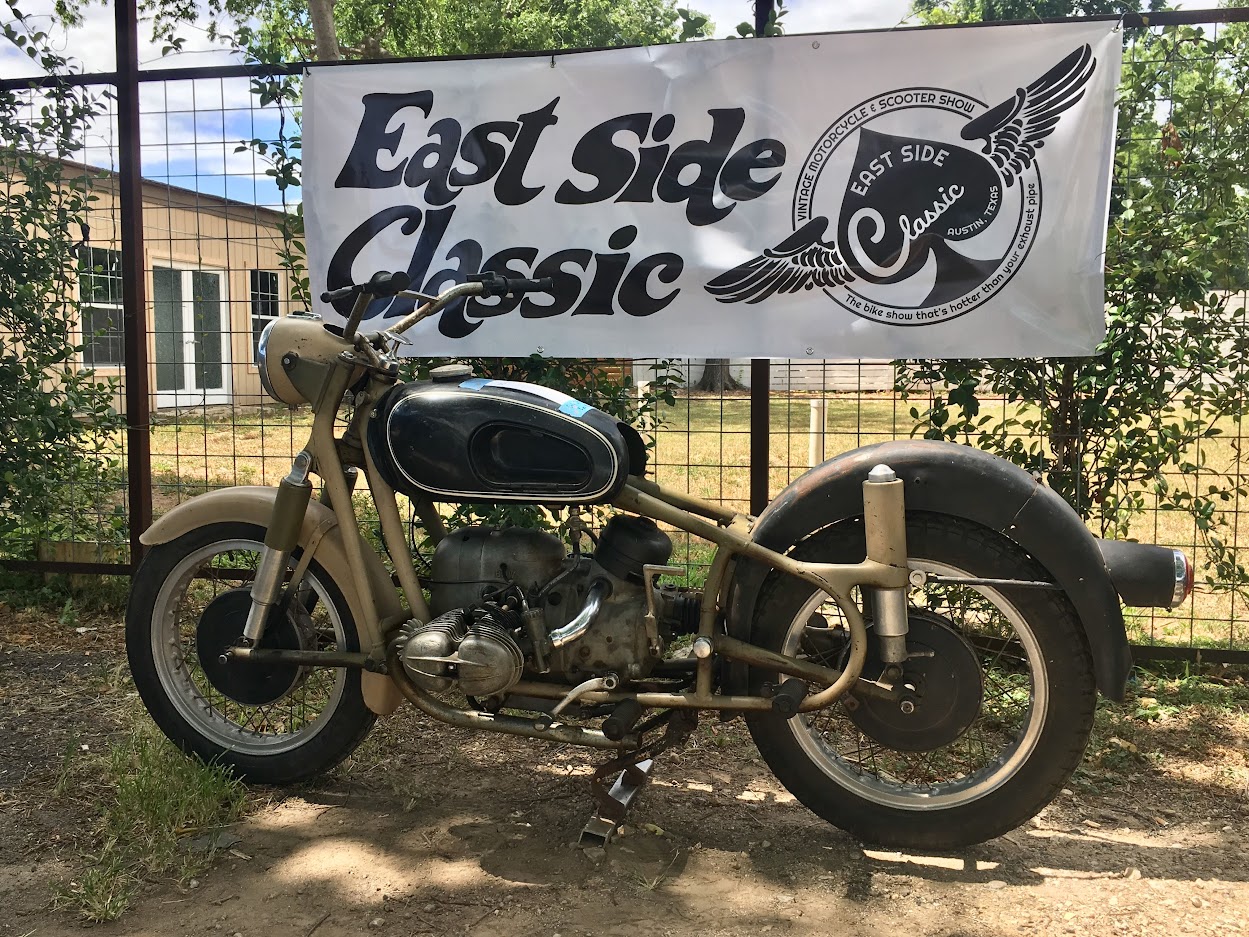 Pics coming through ok? I have a lot more I can add, as I'm currently in the real build process now. Just thought I'd start off with this.
Last edited by goaarongo on Sat Dec 26, 2020 1:54 am, edited 1 time in total.
Top

Looking good so far! As for

Looking good so far! As for the mismatch between engine and frame, I always offer this as a possible source for finding the mates to the parts. There's an orphan list on this site. Just on the happenstance that things work out!!

Thanks for the link! No luck

Thanks for the link! No luck for my #s - but maybe I'll see about adding an entry...
Top

So, mechanical stuff is the main focus of this project.  The motor, despite being pickled with marvel mystery oil 20+ years ago, was seized.  Graphic images to follow - not recommended for children under the age of 18. There was also a nasty stray bolt inside the head.  Looks like it had been in there while running, based on the wear patterns.  Ugh.  It was obvious even to me that one of the guides was trashed, and after 2x more inspections by people I trust - all new valves and guides will be installed.  Seats are ok and can get by with just a cut. 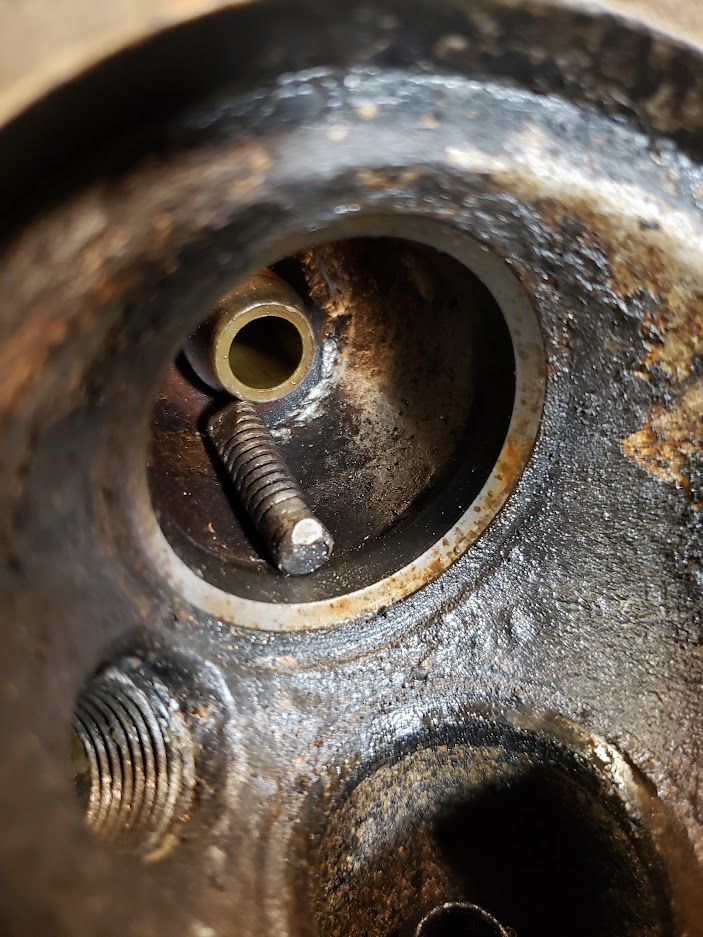 Despite all this gore, after cleanup the pistons & cylinders were aaaaallllmost within spec.  I really thought about running them as is with just new rings to save on budget, but a lip at the top of the cylinder and a general sense of knowing better made me go ahead and opt for new 73 mil pistons.  The heads, cylinders, and even carbs are in process with the machinist now.
Last edited by goaarongo on Sat Dec 26, 2020 1:55 am, edited 2 times in total.
Top

The carb bodies look to be correct - but the slides were somehow both stuck, and sloppy once loose. One last task for the machinist - new 30mm slides. Sorry I don't have a better pic at the moment (with the #s). I did notice this oddness though - anyone have an idea which one is correct? I can do that

Thanks for the link! No luck for my #s - but maybe I'll see about adding an entry...

Let know what you want to do. I have access to make any entries.

Great thread! Usually you can just get new standard slides and clean up the stock carb body. Hate to see any 'machining' done to them! But maybe that's not what you meant. Keep posting updates!

Scary pictures of that motor... but glad to see this thread of getting another bike on the road!
Top

Thanks for the encouragement guys. Schrader - I sent you a message with my frame & motor #s.

Here's more from the inventory process. Clutch is garbage in my opinion.  Warped parts and heavy rust pitting.  For about $250 - I'm just going to replace it. 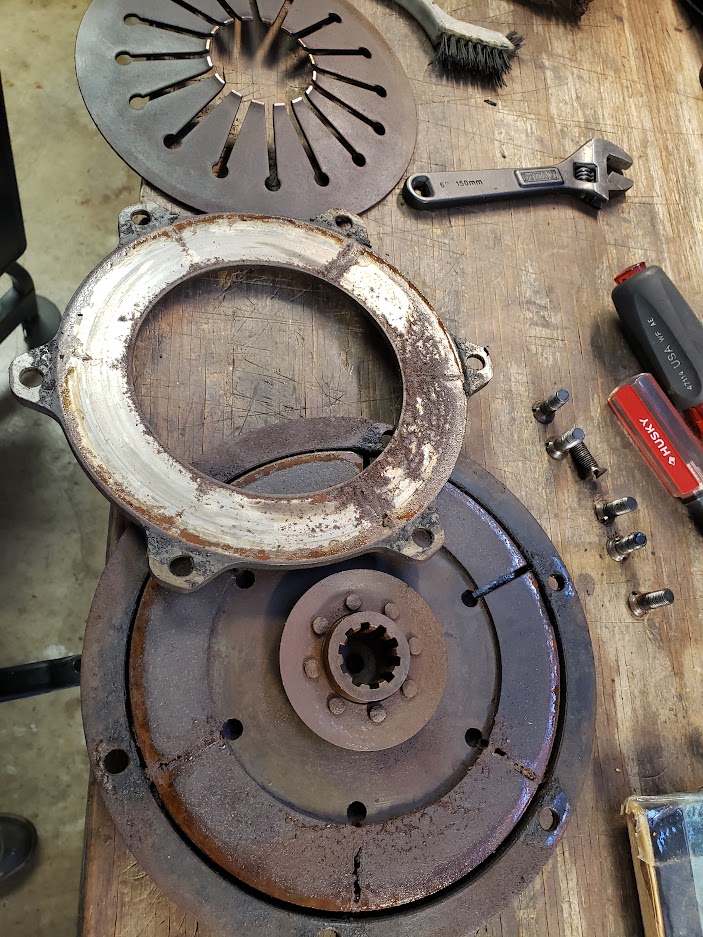 The 2 transmissions were one of the biggest things that caused speculation about the history of the bike.  Originally I thought I might have gotten lucky and scored a sidecar rig - but, that was not the case.  Then thought maybe one was "bad" and the 2nd was "good" and perhaps that was the reason for the disassembly in the 1st place.  Again, nope.  After inspection, both had issues.  So, after some deliberation, the pair are being combined to make one good one.  All new seals & bearings, some bushings and washers and a new idler gear is getting stirred together by a new friend I met via this project. 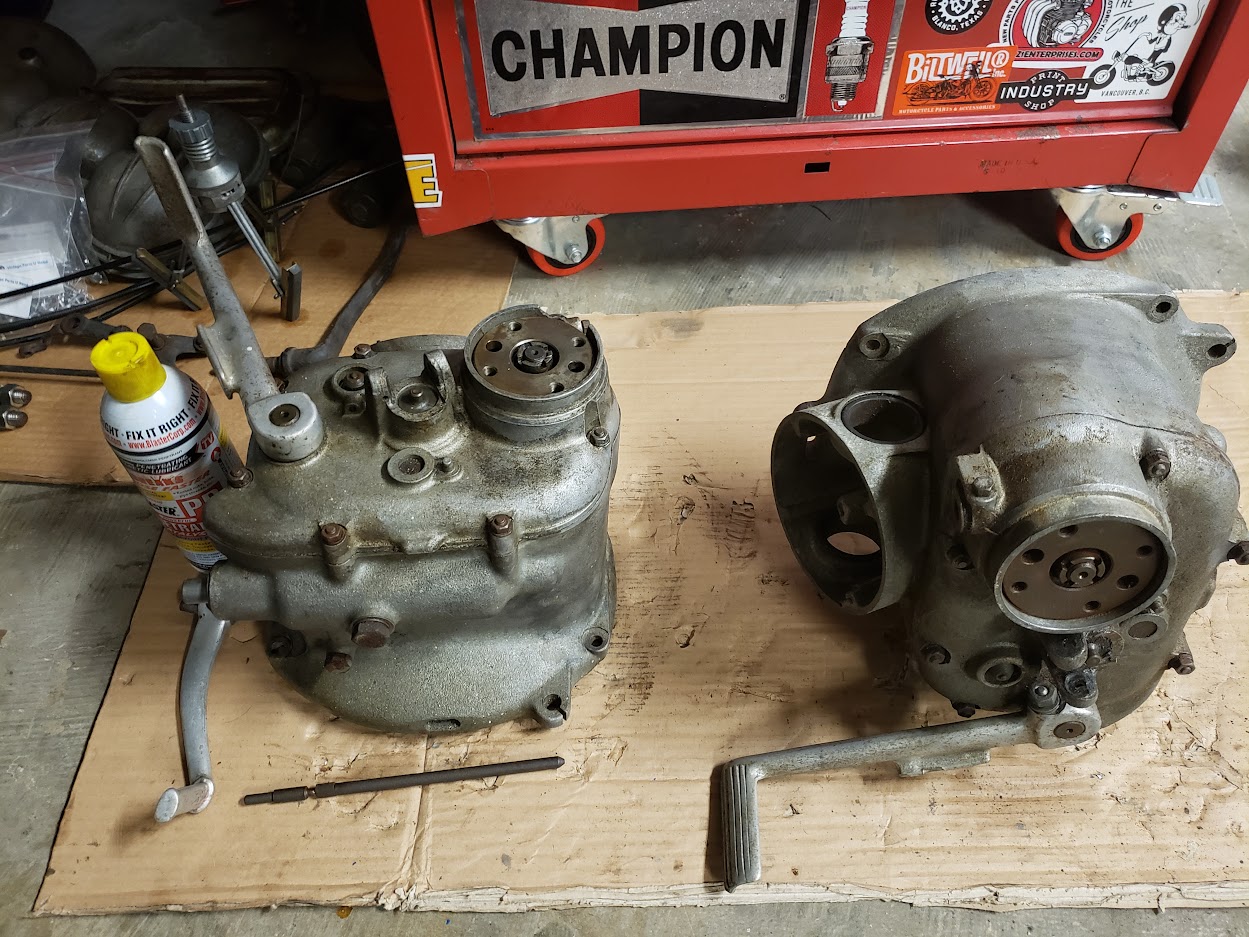 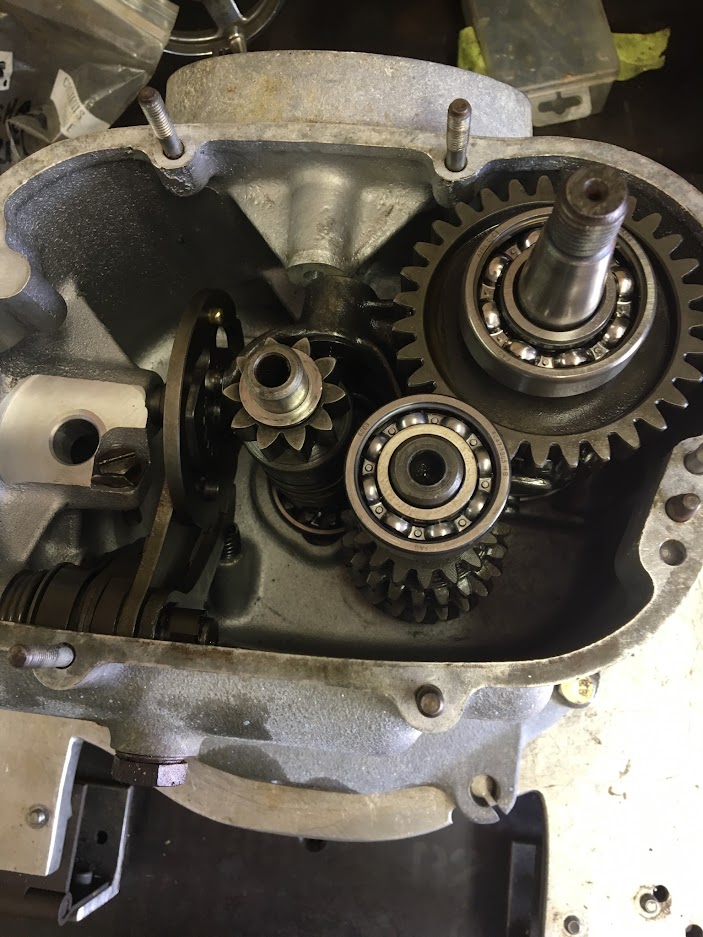 Also, thought this was a cool detail on the flywheel - so extra gratuitous pic.