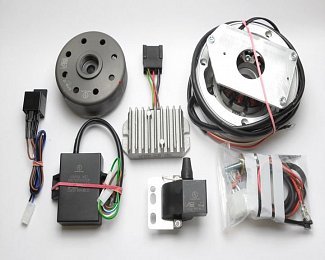 I have the Powerdynamo/ Vape fitted to an R69s and a 1959 R60 of my own and I’ve fitted 7 or 8 for other people. A recent query from someone who has just bought a Vape equipped bike with starting problems made me think that perhaps I should share what limited experience I’ve had with these.

Usually there are no problems and starting is a first or second kick affair. Occasionally there are bikes – and my R69s was the worst of them – which seem very sensitive and unwilling to start with it fitted. I only fitted my R69s with it last Winter and it took me half the season to get it sorted. Now, thankfully, after much head scratching and a lot more swearing, the problems seem to be behind it and she starts as easily as all the others.

I’ll do a walk-through of the various things which might be causing starting problems.

1. Be aware that all these old Be-ems are very individual. If you’ve just bought a bike and haven’t yet learned its idiosyncracies then it may be your inexperience that is the problem, rather than a fault with the system. I have different cold-starting rituals for all of my bikes. My R51 won’t start unless I flood the carbs but if I flood the carb on my R69s then I can just go and have a cup of coffee because there’s no way she’ll start for an hour or so even if I were to remove the plugs and blast excess petrol out of the cylinders!  My R60 likes me to JUST lightly flood the carb and then she’ll start first kick with the throttle absolutely wide open. I’ve got other bikes which would never, ever start with a wide open throttle. The trouble is, of course, that getting to know your bike’s routine isn’t easy if it’s got other problems. I’ll assume from here-on that the bike is in overall good condition, with correct valve clearances and a spark.

2.  Vape says that the bike can be started with a flat battery. It can – but it’s nowhere near as easy and you need a strong kick to turn the engine over quickly. If your battery is nearly flat then that could easily be the cause of your problem.

£. Check that the switches on the Vape unit are set to the recommended setting. The switches are on the ATU which is usually located under the tank. All the switches should be in the OFF position.

4. The instruction manual downloadable from Vape shows how the rotor and trigger should be set up. Check that yours is set up correctly – if not then your spark may be weak or intermittent.

5. Ditto check that the ignition is set up as per Powerdynamo’s instructions. Once the engine is running then use a Timing Light to ensure that the timing is accurate.

6. The extra power behind the spark of the Vape can be too much for old HT leads. Powerdynamo always supply new leads but not all owners bother to fit them. If yours hasn’t had its leads replaced then this is an extremely likely cause of problems ( particularly when hot). If you do replace them then avoid silicone leads – get the old fashioned, copper wired stuff we’ve used on bikes all our lives.

7. Are you using any sort of additive in your petrol? I’ve always used a lead replacement in mine but the R69s, in particular, hated it after fitting the Vape. I’ve also found that it’s a no-no to have those lead balls/blocks which are supposed to act as lead-replacement in the fuel tank. I think they’re called Spitfire catalysts but, whatever the name, I’ve never known a Vape-ignition bike start well when these things are added.

8. Last of all – plugs. This was the final part of the cure for my R69s. I found that with brand new plugs the bike would start easily but even after a ride of 20 miles or so she became a bad starter. Cleaning the plugs would help a bit but no-one can clean plugs after every ride! The Vape instructions recommend using a multi-spark plug, where possible. I could never find one with the right heat range. I’ve always sworn by Bosch or NGK plugs but I started trying other makes. KLG (I didn’t know they were still made!) turned out to be easily the best (NGK are the worst with the Vape). Now, with no petrol additive and with KLG F100 plugs fitted my R69s starts easily every time.

If you need to check the installation then full instructions can be downloaded from https://www.vape.eu/data/product/125b714c5a2e0ce1.68174997.pdf