My frame, like all similar year BMWs has a hole for the sidecar plug. 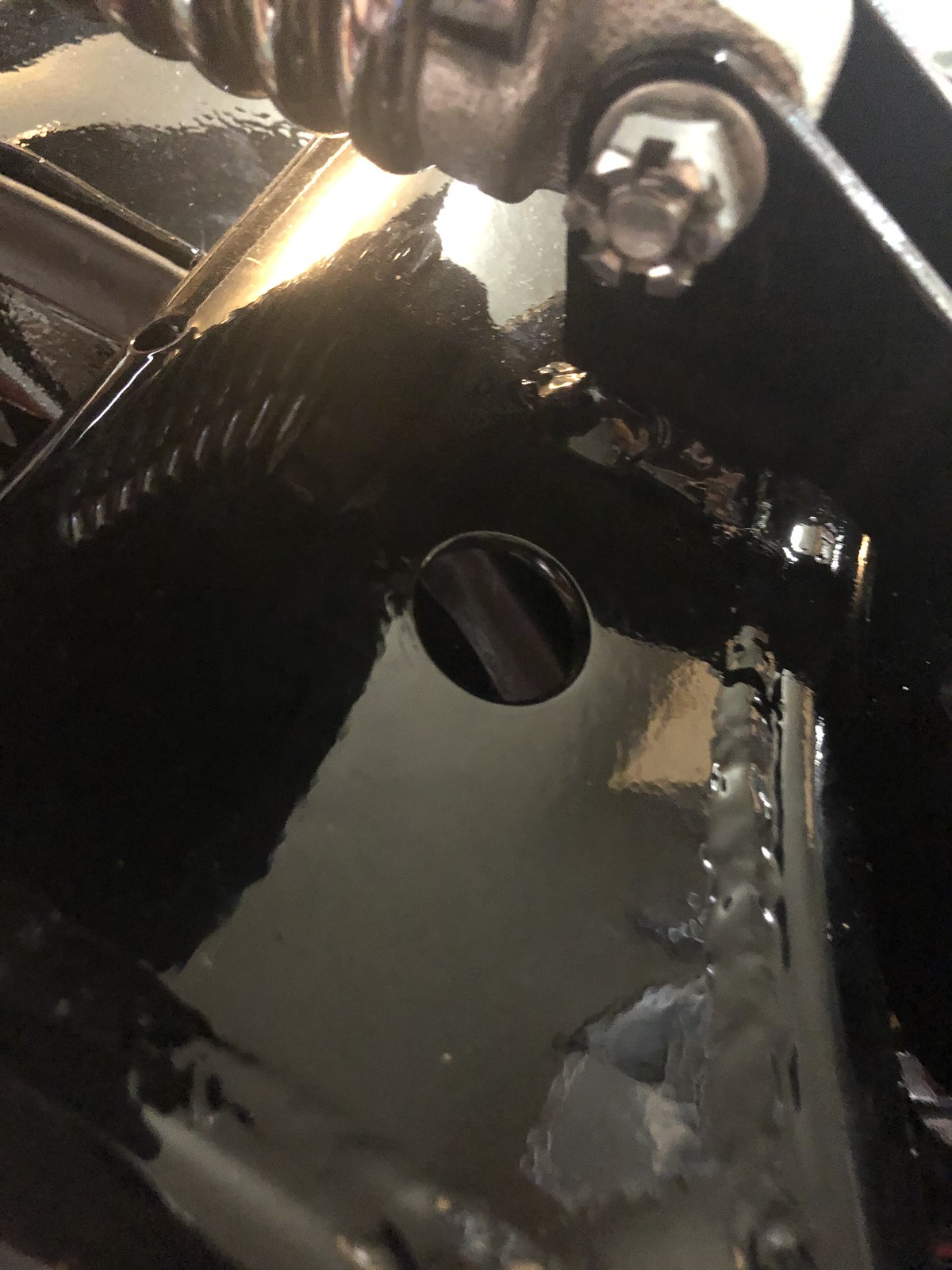 I thought it is the perfect spot for an auxiliary cutoff switch. 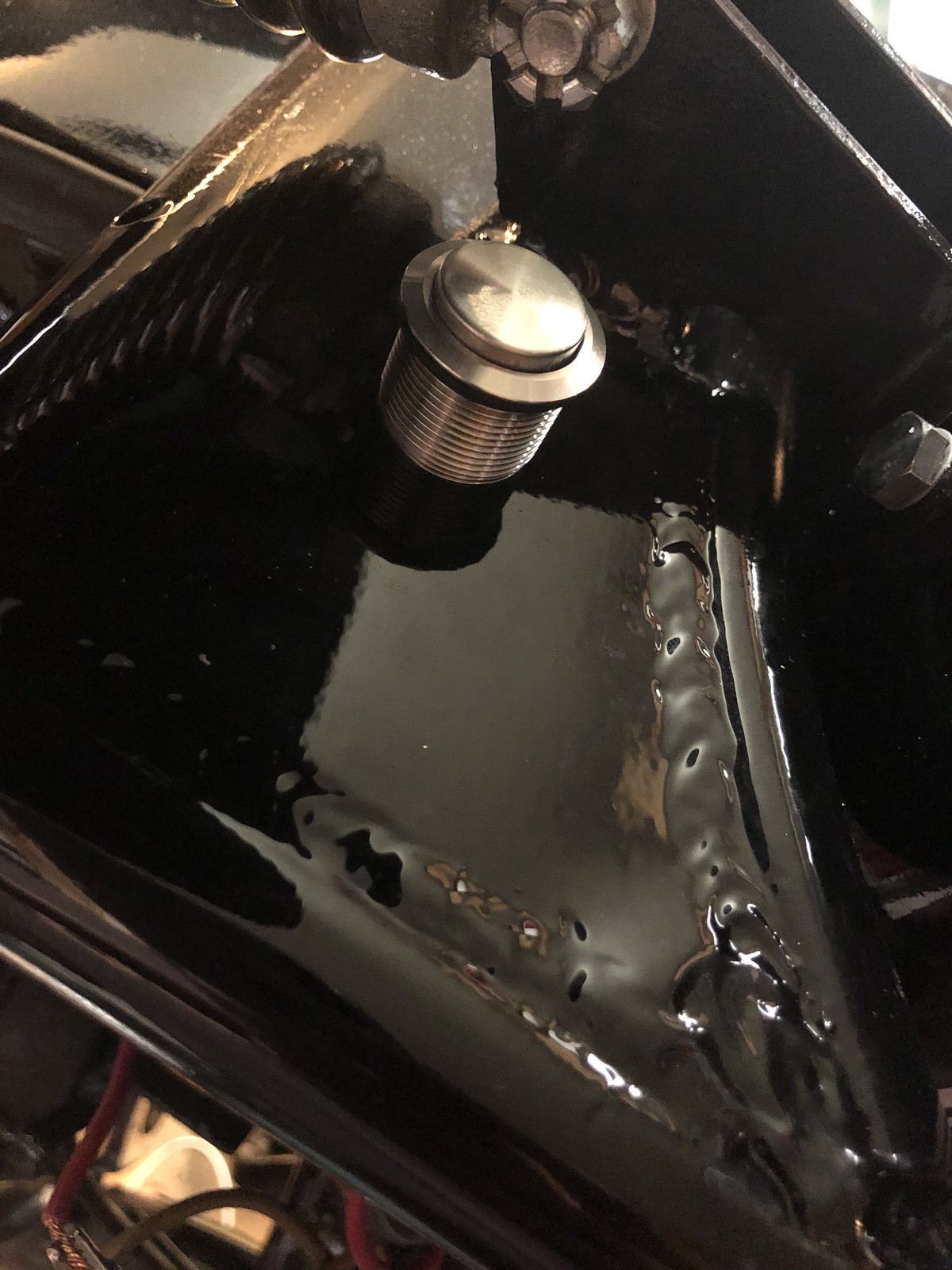 I found a push on push off 19mm round switch. 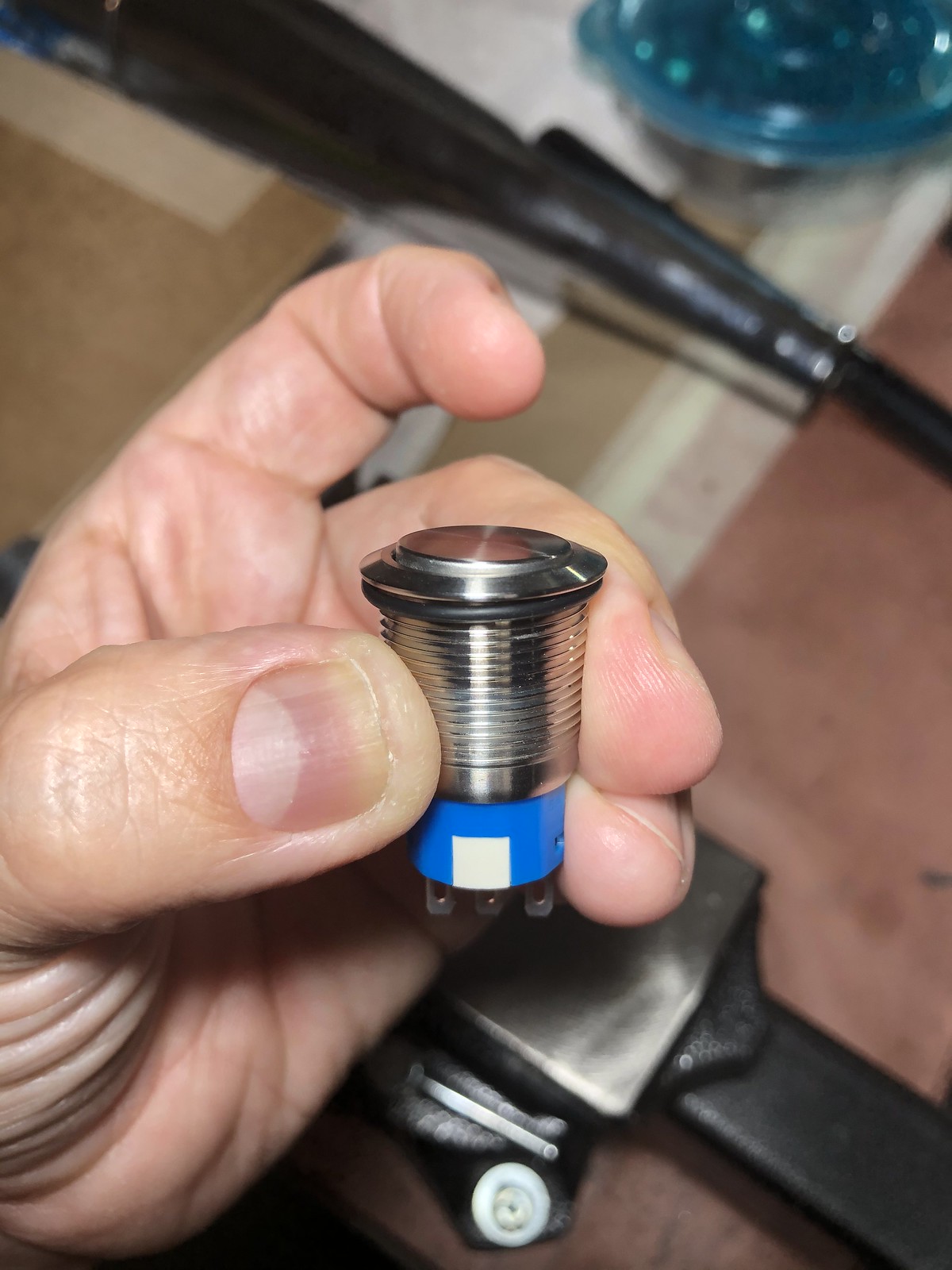 I connected it between the battery and the number 30 wire. 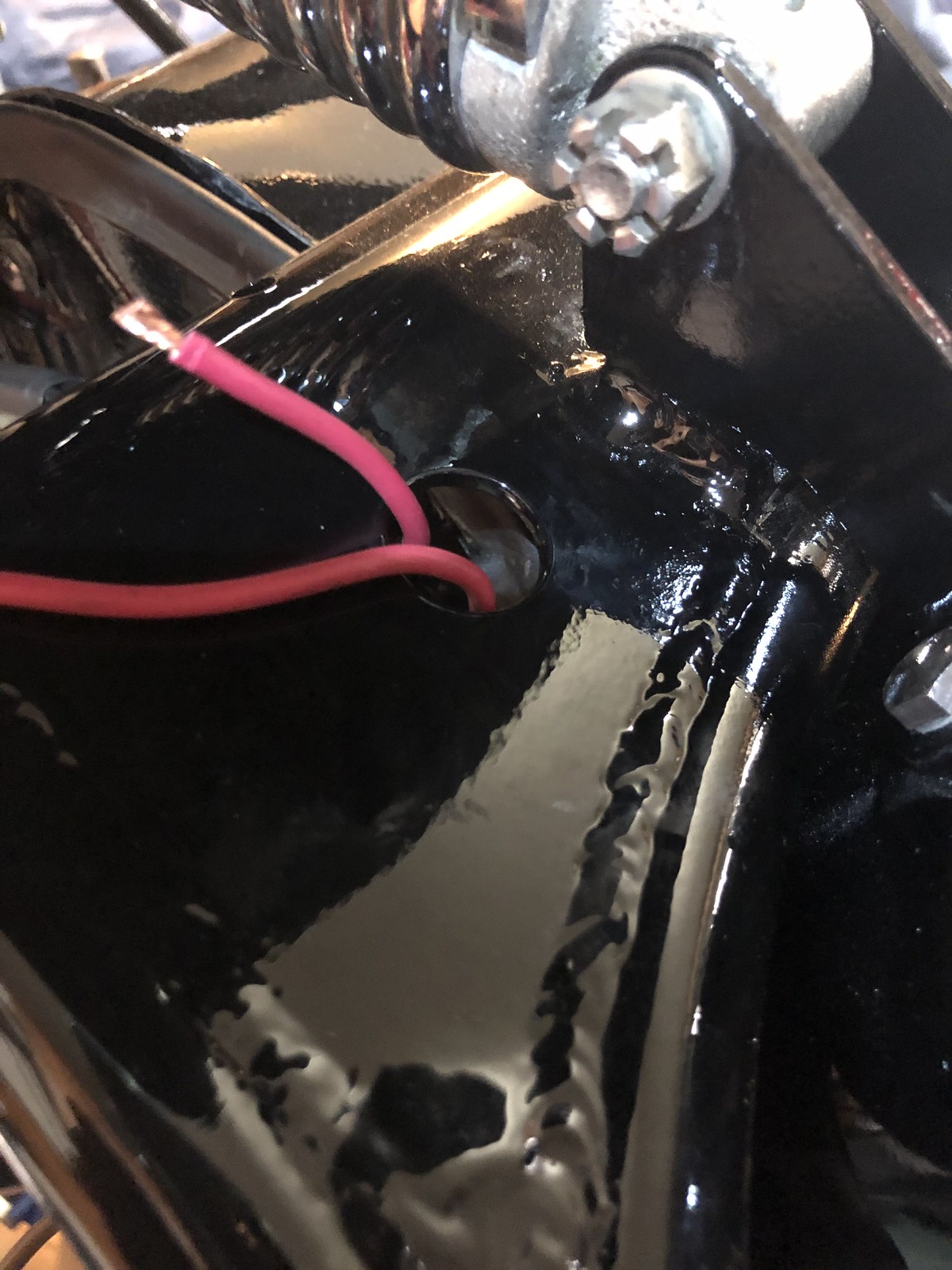 Small modification that could be deleted in a few minutes if needed. I like the looks. 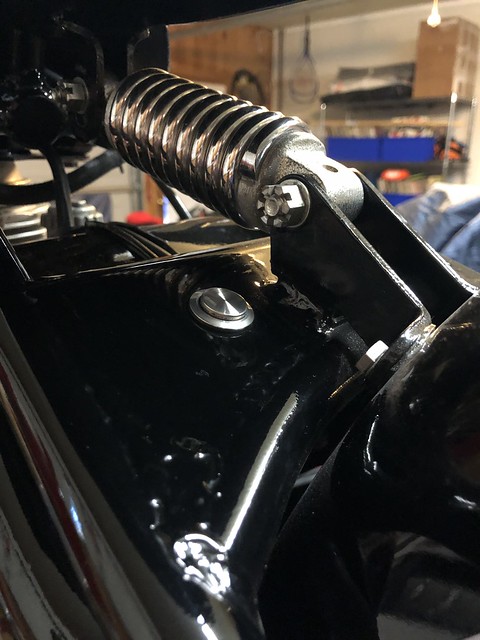 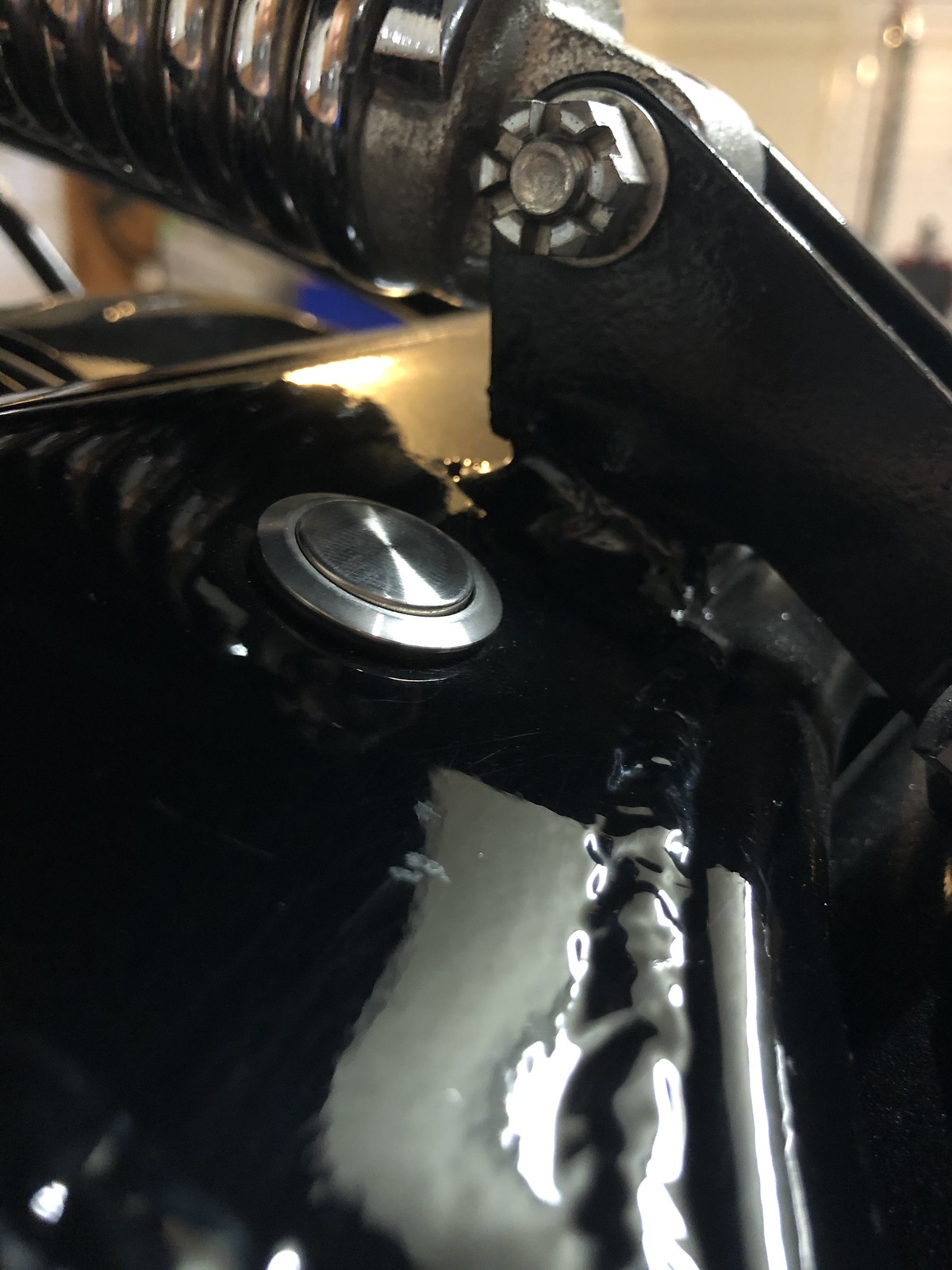 A few weeks back, after I mounted the engine, I try to install the exhaust system, but the end of exhaust pipe and muffler didn’t match. The tip-end is 5 inches away from the frame and the muffler.

I went online and discovered there are separate numbers for the engine heads and exhaust pipes for each of singles models, R24, 25, 26 and 27. 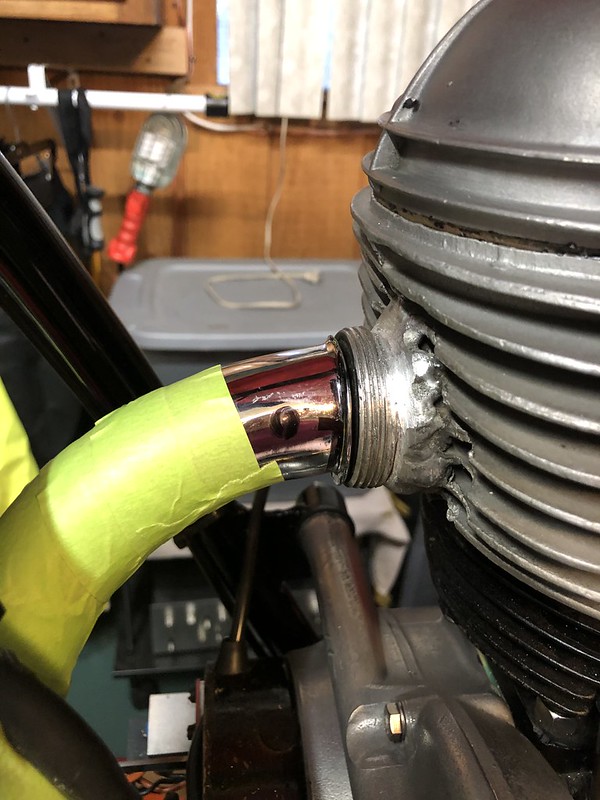 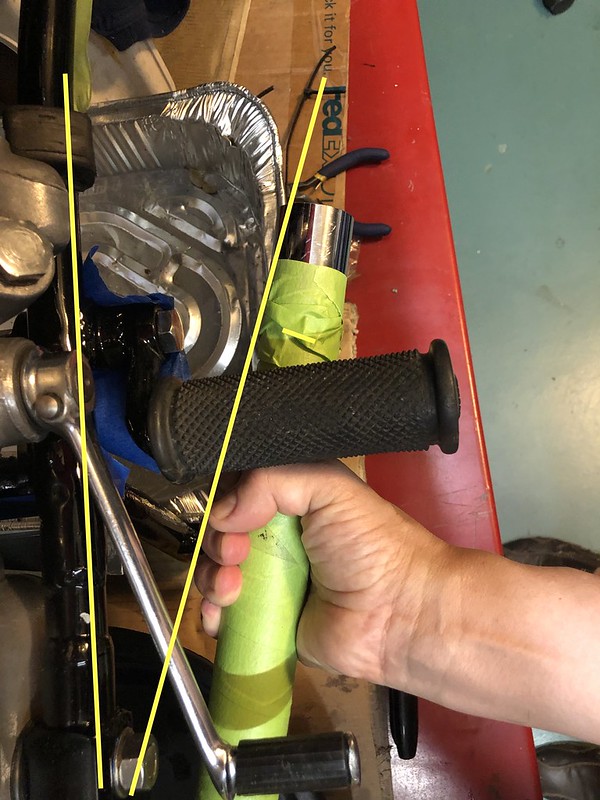 I realized I got an R27 exhaust pipe by mistake and order the correct for Zenaida (R26) and it’s been inside the box since then.

On the left the R27 exhaust on the right the R26. It's a huge difference. 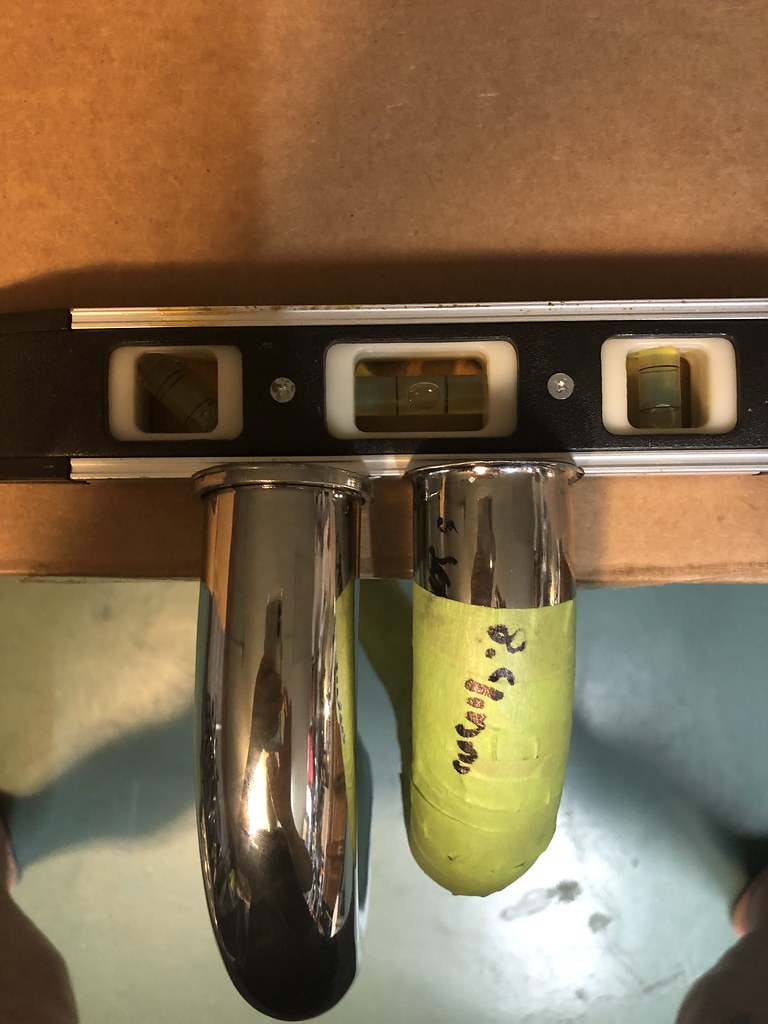 The time came for a test ride and to install the exhaust system, but oh surprise.

The new R26 exhaust didn’t match either.
In order to make both exhaust pipe and muffler mouth align I need to incline, sideways, the pipe at the spigot 8 millimeters. 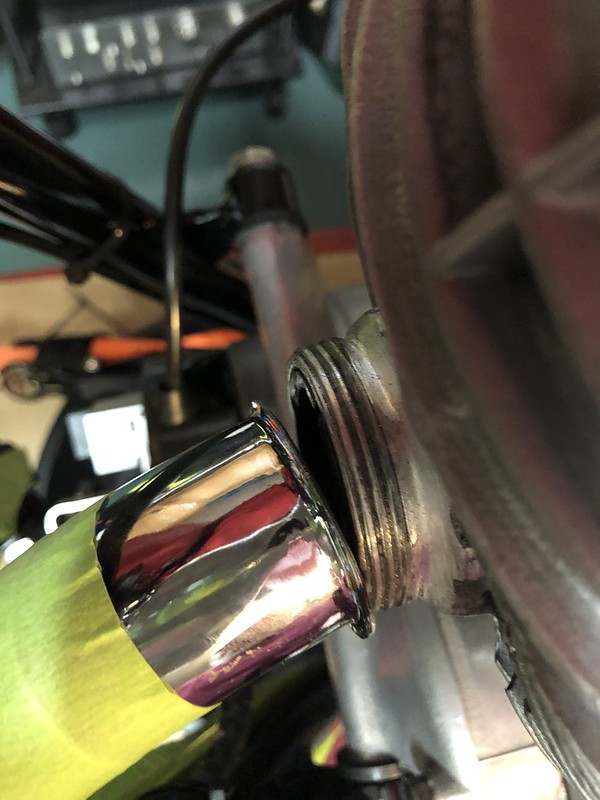 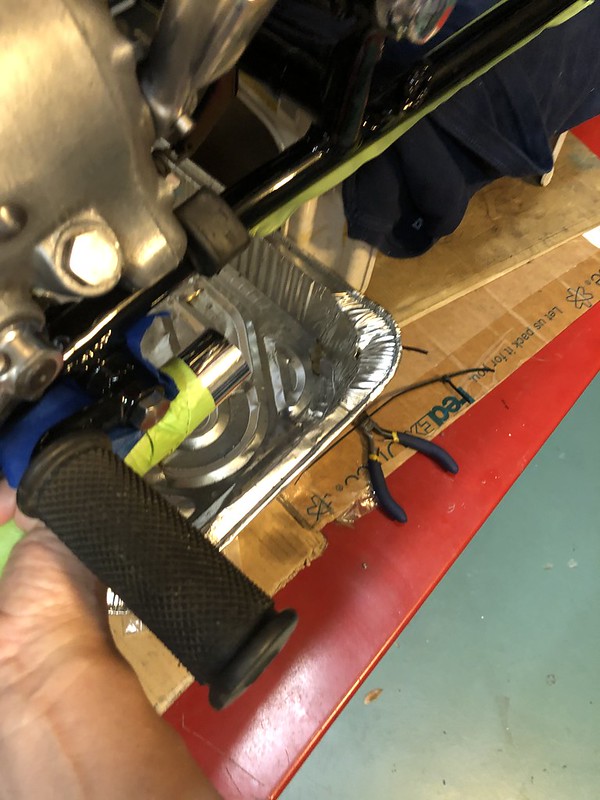 I placed the new pipe against the very old one and there is a difference. The old pipe was bent to run straight and parallel to the frame, while the original follows a different line. 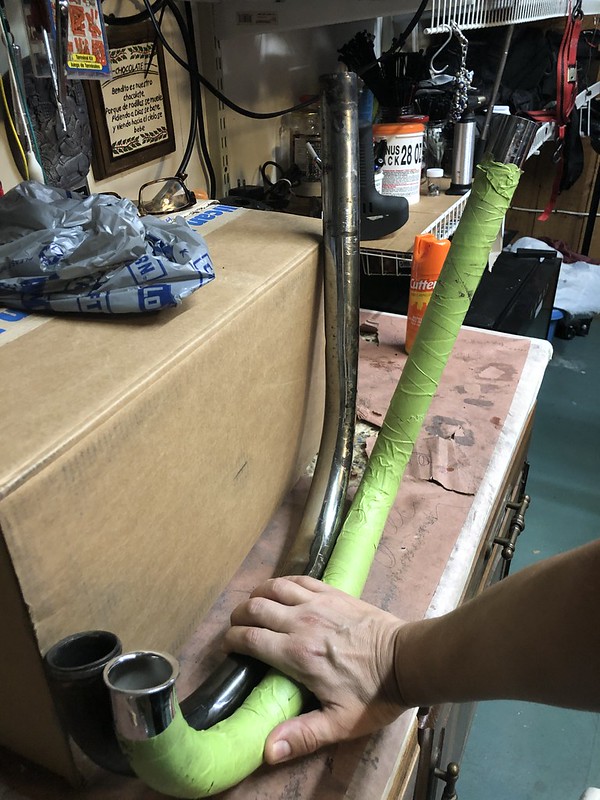 15 years ago “Someone” offered to repair the threads and managed to burn the fins next to the spigot. Unfortunately I didn't know any better and didn't pay much attention to the work. He really did a terrible job. 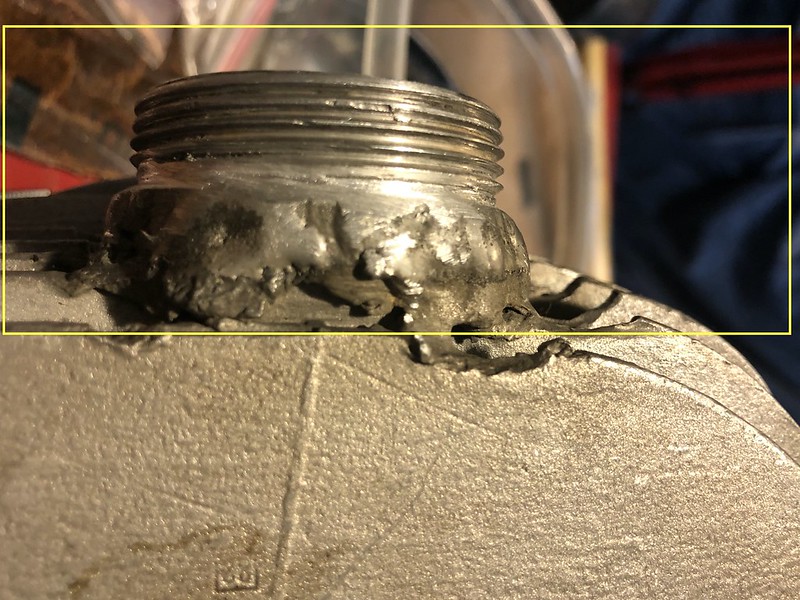 Before touching the head I try to find an exhaust fabricator to bend the pipe or to modify it but I couldn’t find any local talent with the right set of dies or willing to cut and weld the pipe at the right angle.

Looking for answers I contacted the previous owner in Mexico. He remembered something to do with a twin head for a repair, but this happened more than 40 years ago and he couldn’t give me more specifics. 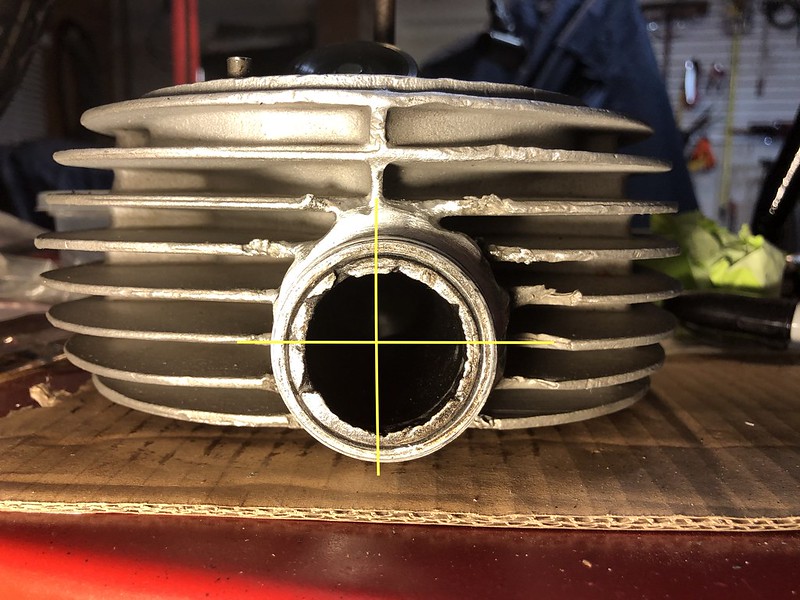 I found out the singles heads spigot have a 15 degree inclination versus the twins. You think the difference to align the pipe and muffler is more less 15 degrees? 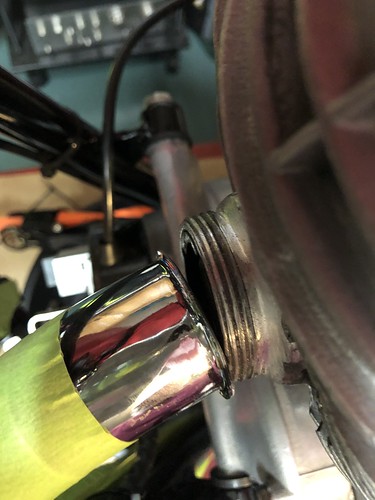 Is this the wrong head or a bad repair or both?

I couldn’t find a mark or a part number, can you tell if it is a twin or single cylinder heads? 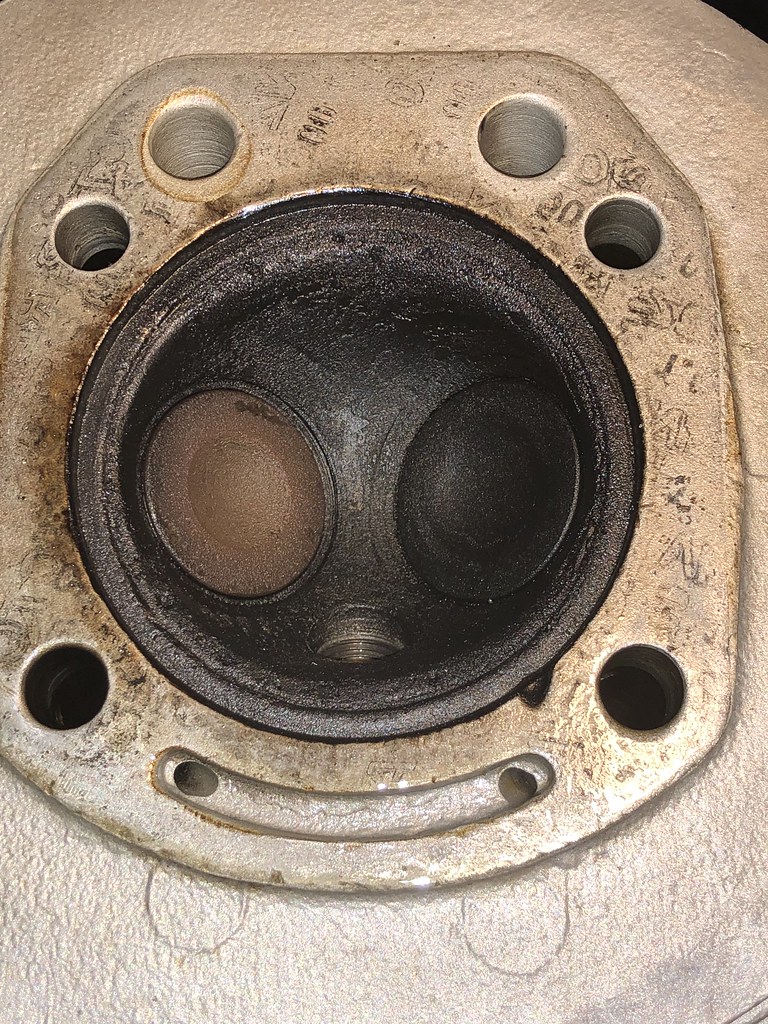 Look for what it worth, here is one idea and probably not the best one by any means.

Given the head is pretty sad there may be worth the risk of modifying the head to match the header you have.
If that fails then plan B is source another head.

What I would do is check to see how much metal you have to work with..... that will set limits on options to some extent.
Then scrupulously clean the head, then clean again and probably again.
If you are a TIG welder you will appreciate that old aluminium castings can be so impregnated with oil to make welding difficult and sometimes in my case impossible.

If the casting takes a sample weld with little trouble then you can look to a solution which involves welding.
For example machine up a new threaded spigot and weld it on at the right angle.....

However if the alloy is just impossible to get clean enough to allow welding then my second choice would be to cut and modify the header and then have it rechromed.

My third option would be a machining option. However I don't have a secret design but it is amazing what might be possible given some thinking time.

Obviously if all those options and others that fellow members might suggest fail, I guess it is look for a different head.

Mal tanks for you suggestions. Fixing or modifying the exhaust pipe is not addressing the original defect.
I decided to fix the head issue.
I found one online, but by the time I convince myself to purchase the rebuild head it was too tale, It got sold.
San Arthur in San Antonio, Texas
'58 R26 '76 R90S '94 R100GS/PD
Top

If you have decided to replace the head once you find one then you have little to lose by modifying the existing head.

Obviously if the head proves to be so impregnated with oil that welding is not an option, you could try for some form of screw in or bolt on interface.

Due to financial issues I had to reorganize my projects and postpone the new and beautiful R26 head option for a latter date. “Thanks Carl”. 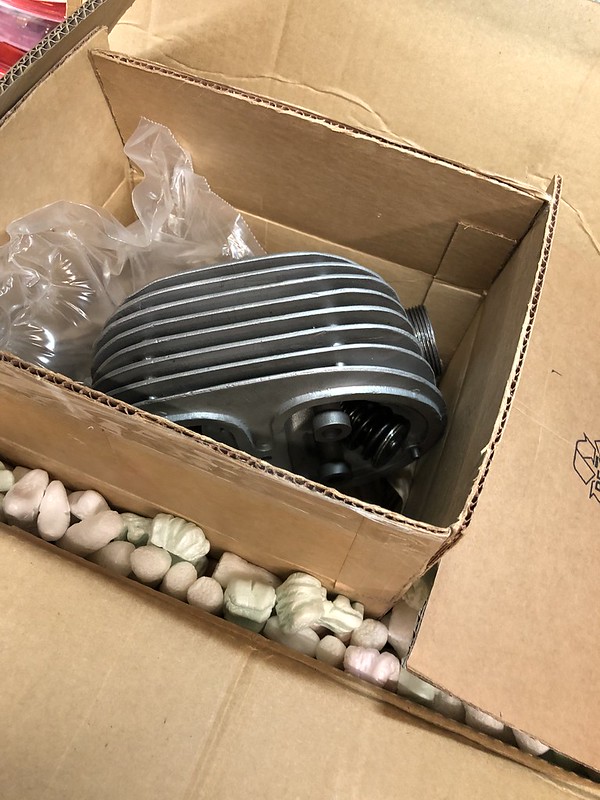 With not much to lose and no financially feasible options, I took a chance and sent the old head for a quick fix/repair. 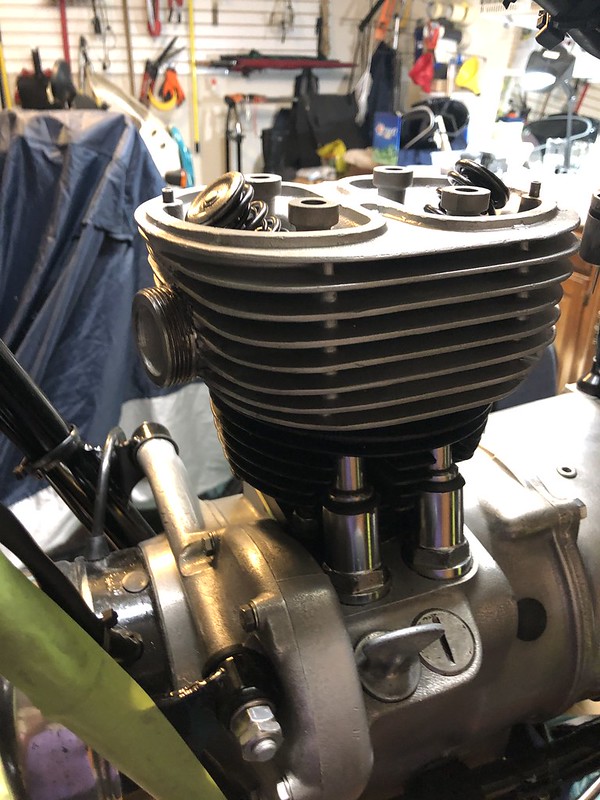 Right of the box I can tell the exhaust offset from center.

I placed the exhaust pipe on top of the thread, and it aligned with the muffler no problem. 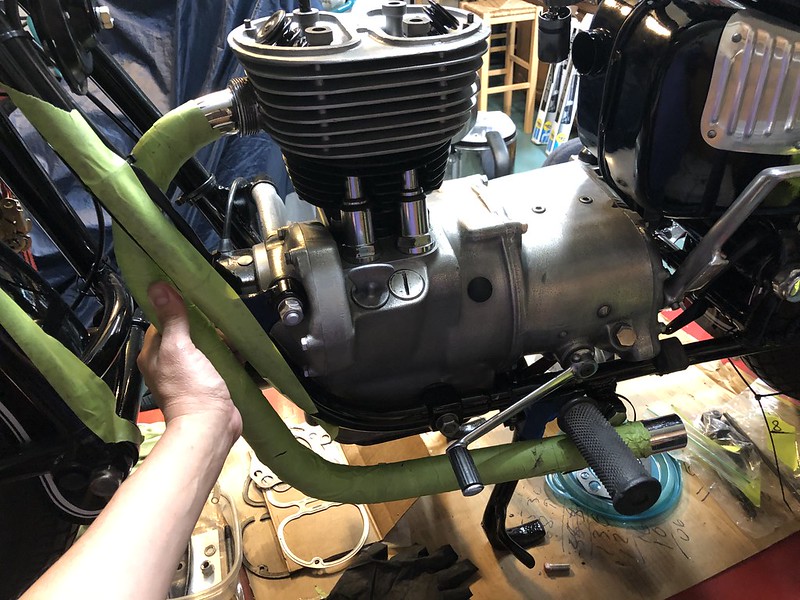 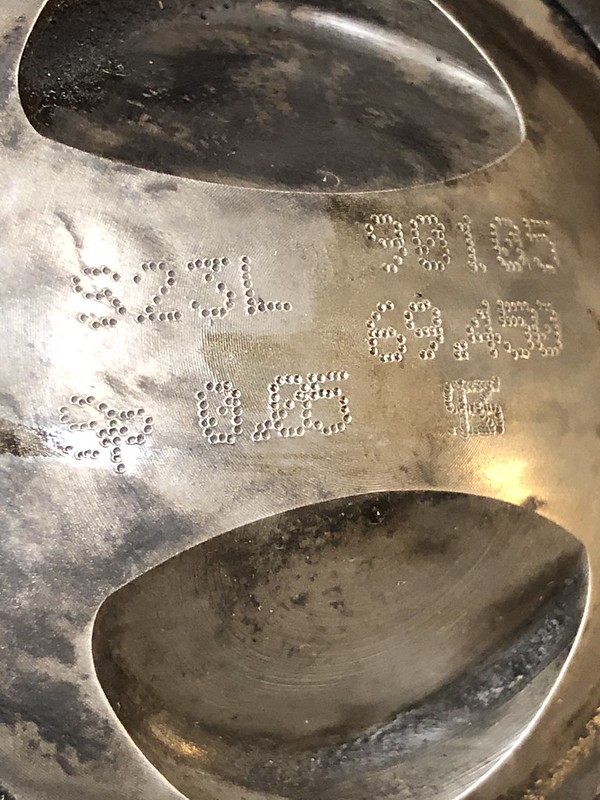 I will torque and adjust the valve clearance and report in a later date. 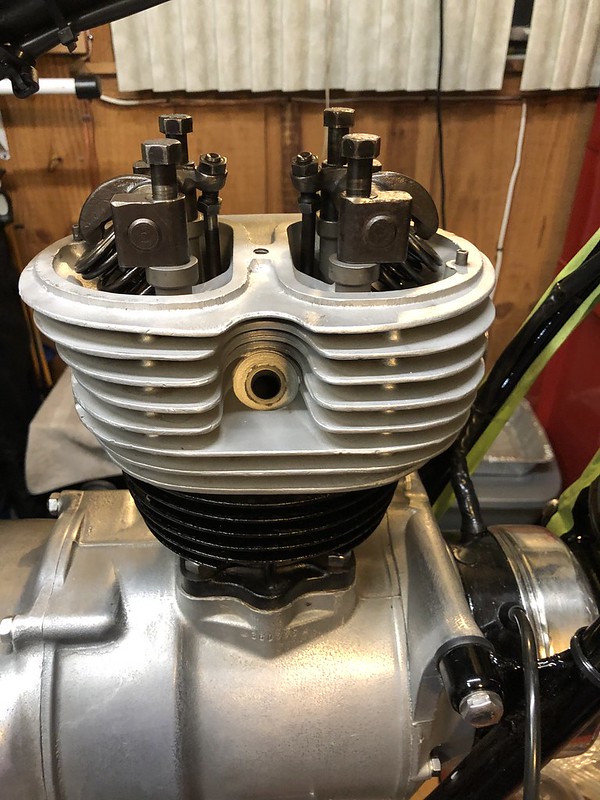 Sorry but I got a little sidetracked with other german engine issues. 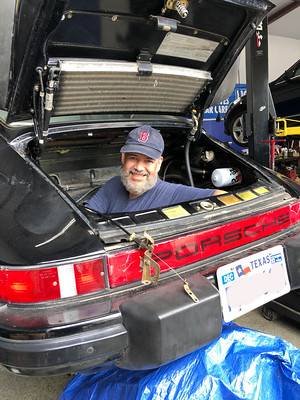 At the end the exhaust pipe and head threads match perfectly and the silencer aligned easy. 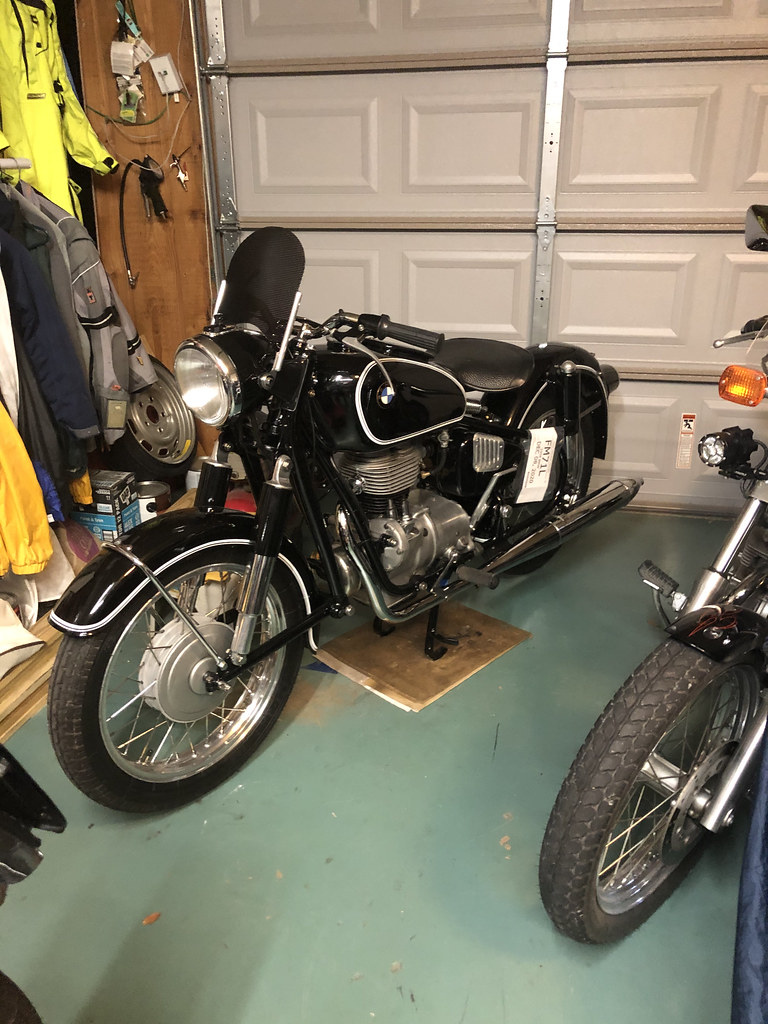 I had some issues with timing that were solved by changing the points, the old set had a weak spring making it impossible to time properly. 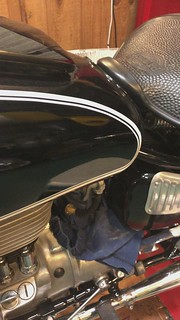 It was back firing and while kick starting Zenaida I hurt my ankle severely and had to rest my foot for a few weeks. I had to put the project to rest.

After finally test riding Zenaida last month I notice the handlebar moving up and down.
Chris told me I had the wrong handle bar spacer tubes for riser d-bolts. I order the correct set 32 71 2 072 147  from Vech and handle bar is set in place.

Another part missing was the crank case vent tube and pin. I checked in all my pictures since I bought Zenaida and it was not there. After so many miles and years and never notice it missing!!!
The front wheel was wobbling too, I thought it was the spokes. Fortunately it was a loose wheel bearing cover. An easy solution with the right pin wrench.

After traveling around Alpine, Tx last weekend my fourth gear pop out a couple of times. I think I'm not properly engaging the gears and will use a heavier lubricant.
Chris thinks, after so many years of use, my gears are wearing out. 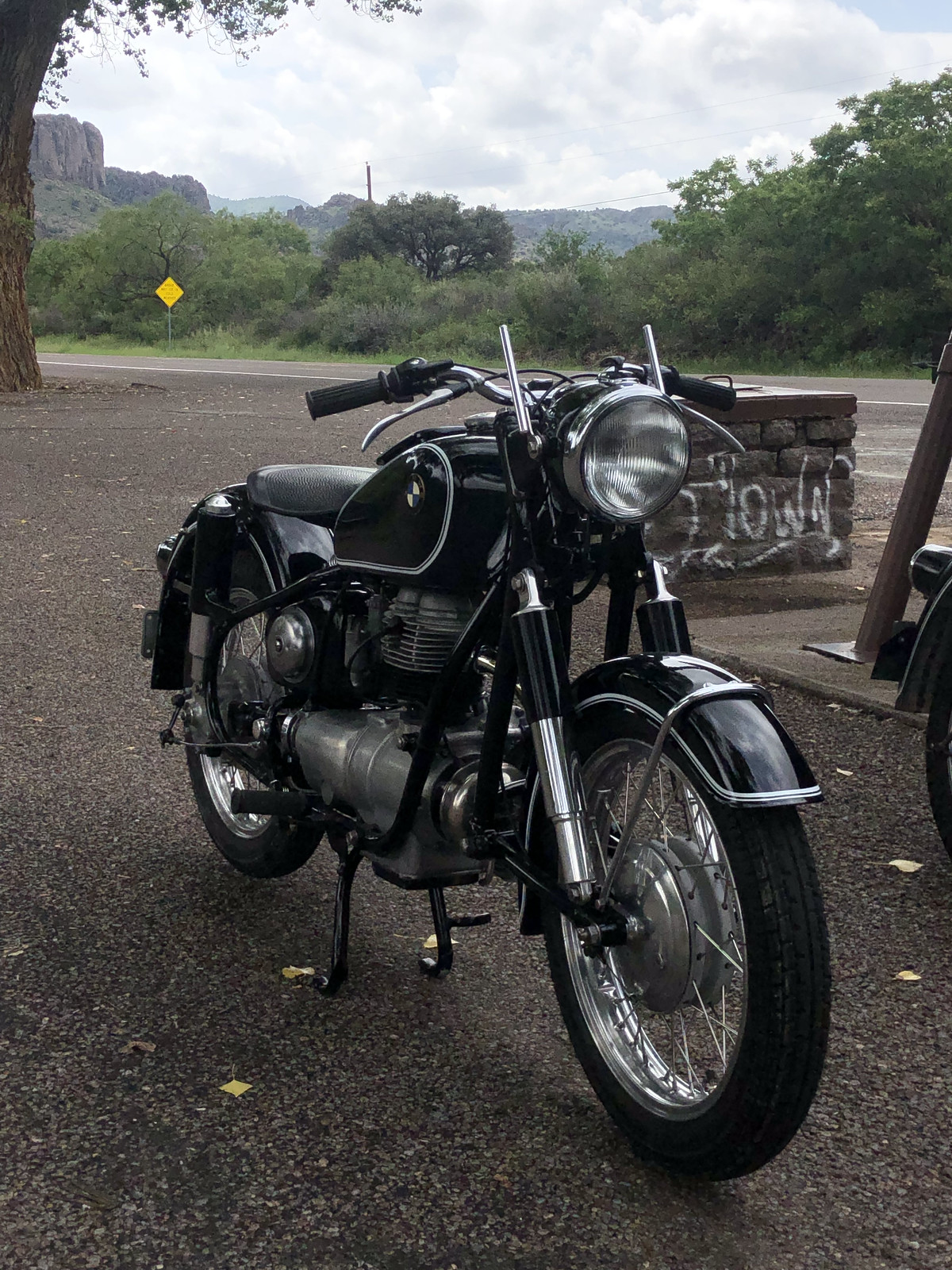 It was a fun project and I learn a lot, thank you for following it.

Thanks for writing, I can't believe I started this project in 2016 but only took a few months to put it back together. 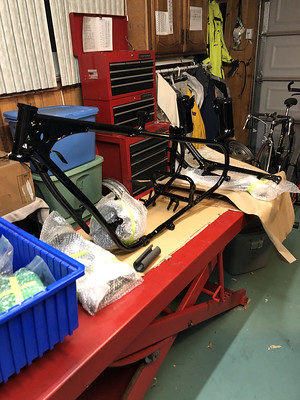 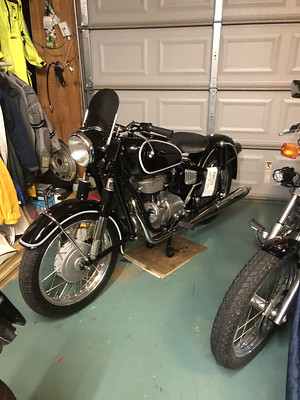 While taking Zenaida for another test ride I start feeling some gear shift problems.

I was having some difficulties down shifting. Instead of just using my toes I needed to place the weight of the foot to change gears. I return back home.

A few miles into my return I got into a right hander and before the turn, Zenaida died on me.
During those split seconds I thought: maybe an electrical issue with switch plate or key, a clogged fuel filter?
I remember seeing the generator light on, and after the turn I started pulling to the side of the road. 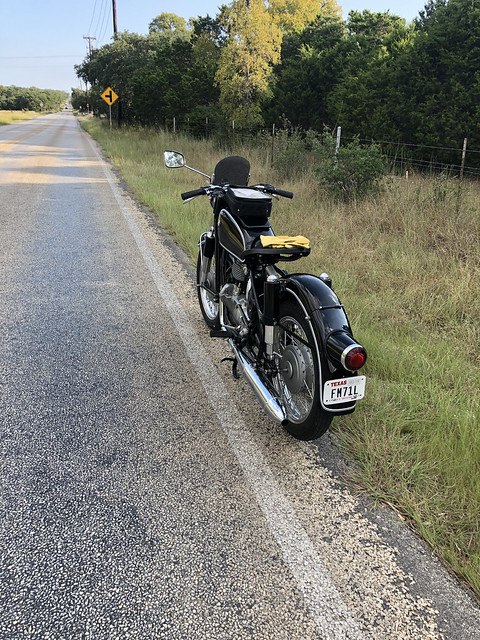 I don’t remember if I had the clutch engaged or tried to change gear but suddenly the rear tire skidded and Zenaida stopped.
Car following was extremely unhappy.

I tried engaging the clutch to push Zenaida, and nothing.
I had to move the shifter hard, up and down, to find neutral and finally push it out of the very, narrow road, I was too close to the curve.
The shifter will return to the center, this spring is ok.

I checked the clutch cable thinking maybe the lever was not working the pushrod?

In what I think is neutral I try to start Zenaida, but the kickstarter lever is froze in place. 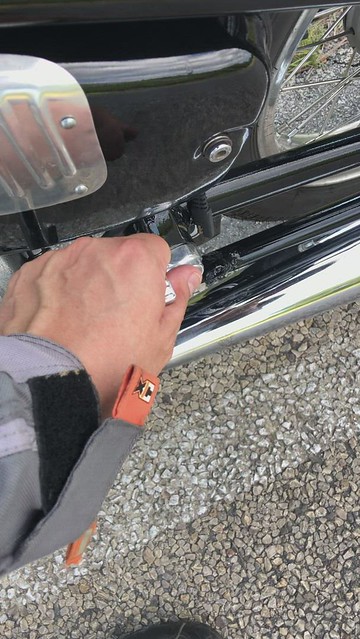 If I push Zenaida I can see the cardan shaft turning, but bike wont move if in gear even with clutch engaged.

I remember Chris telling the shafts were optimal when we work on the 3rd gear.

Did the kickstater return spring fell and got stock inside the gears? It was working fine.

While asleep I was dreaming with woodruff keys, sliding claws, gears, bushings, bearings, shift forks, oil… Did I replace the oil, did I put gear oil in it?? I will chek inside with my endoscope later today.

Zenaida is on the bench, but where to look first?

Why did the engine stalled?
Did I seized the engine, the valves need adjustment, electrical problems, gas problems? I cant push the bike while in gear, but why did the bike coast if the engine was seized?

Why is the kickstarter stuck in place? Why will the cardan shaft rotate if I push in neutral, but wont move if a depress the clutch while in gear? 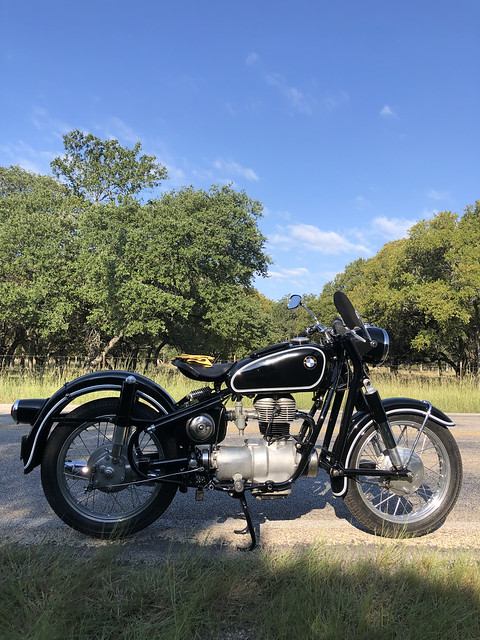