Dave - thanks for the scoop on the rims. Love that detailed info.

So, going over the frame, things seem good. A little surface rust, but no major damage. But the kick stands - oof.  The post for the side stand was broken off flush with the mount, so I had to drill and retap for a larger size post - pretty common so I'm told.  The centerstand that was with the bike was an absolute abomination - at least 2 inches too short, and mangled in addition to that.  Once I got a new one, I got a taste of how bad the mounts were.  They were salvageable, but not without heating and adjusting and a modest amount of welding.  On one side I actually added some 1/8th inch plate to build the area back up and hopefully add a bit more strength. 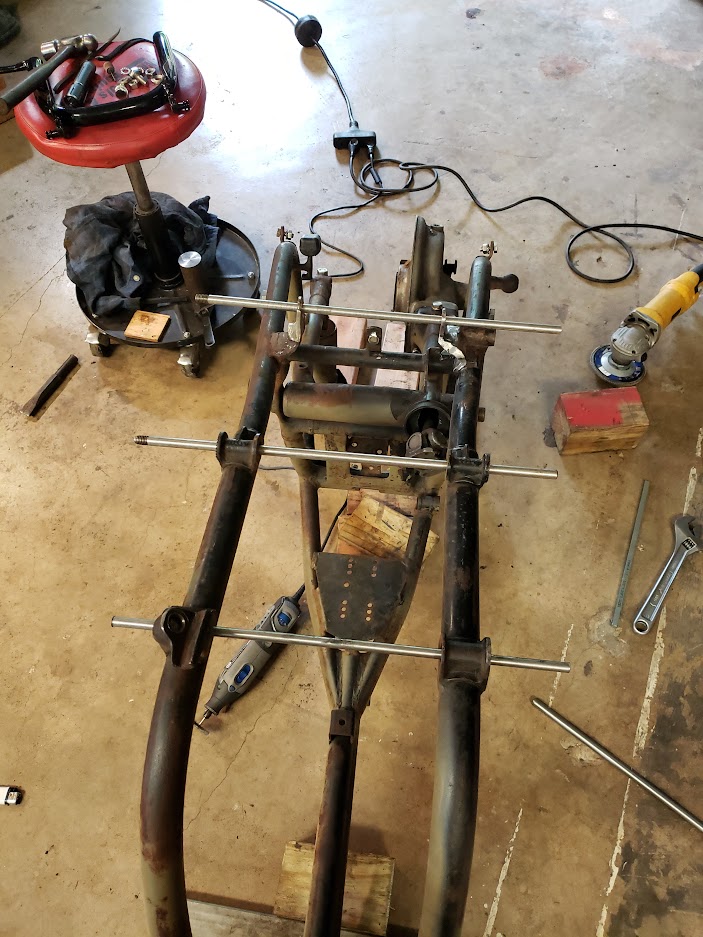 So. after a massive amount of studying and highlighting diagrams and then making a very detailed spreadsheet because I'm a huge nerd, I pulled the trigger and ordered a BIG shipment of parts from Salis Parts in the Netherlands.  Getting the shipment here was a little touch and go (I don't recommend importing bearings and I don't recommend FedEx), but Salis was very helpful and their parts are quality and prices fair. 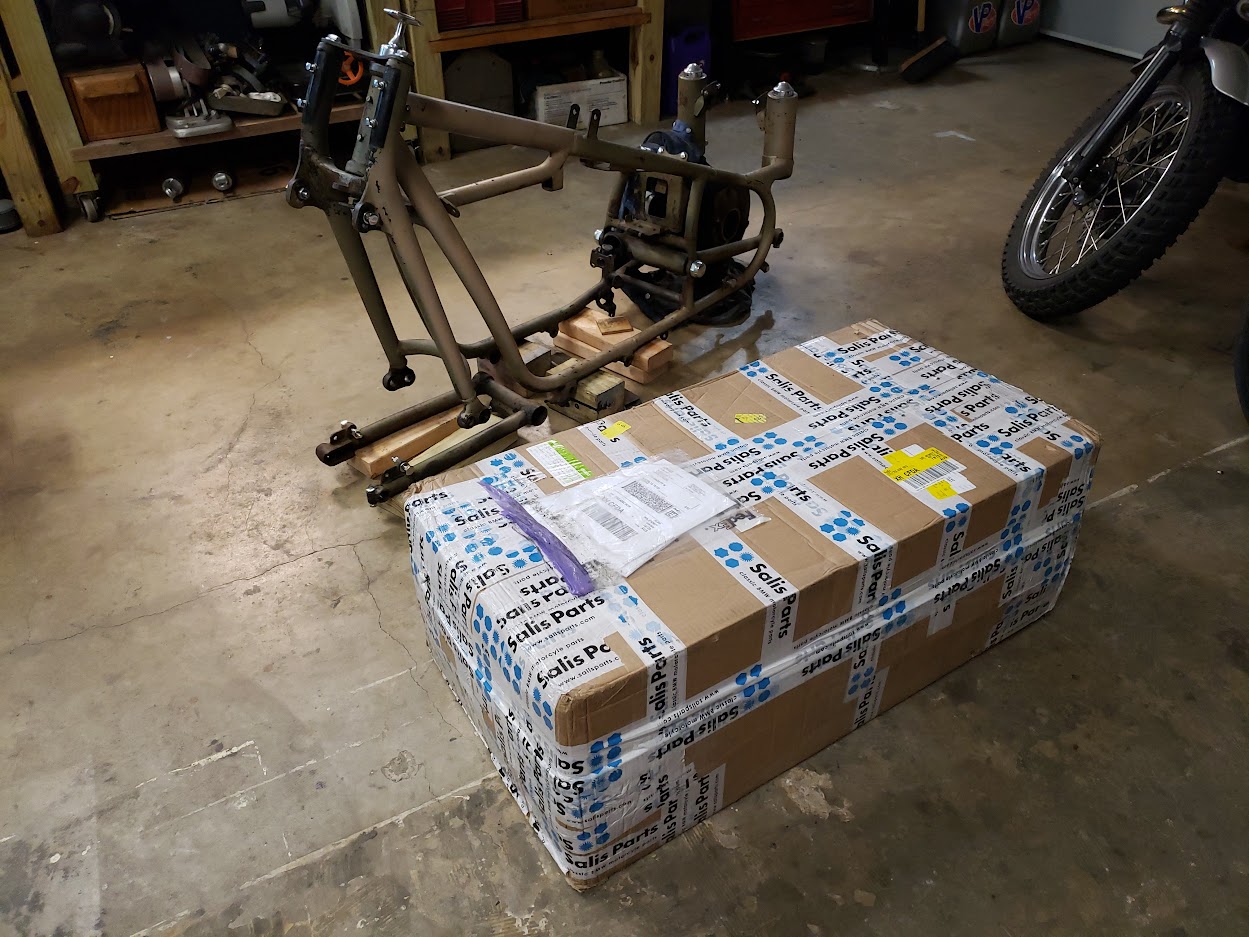 I feel like I've turned a big corner and the more enjoyable build process is beginning.  Already a little cocky... 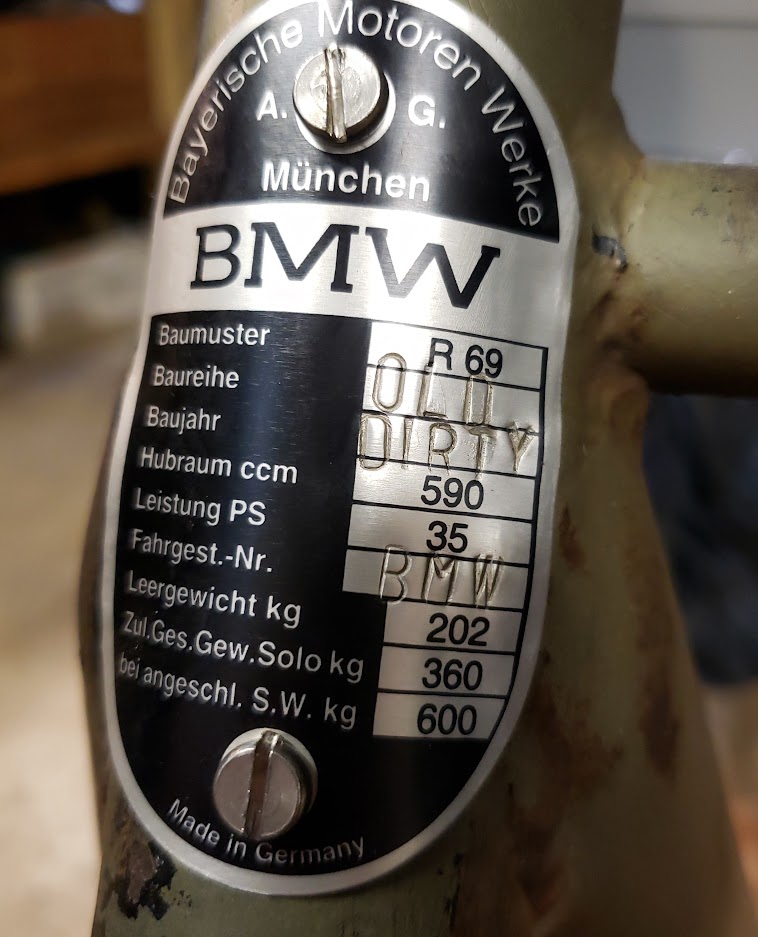 This rebuild/restore thread is great!
Great quality pictures to boot..
Thank you again for the details.
Top

Oh man - I love this site update. I know I'm new here and maybe wasn't used to the old one - but I just wanna say thank you to whoever did this work. Came at a great time too, cause I just navigated one of my bigger hiccups. Self imposed of course.

The obligatory slinger servicing was on the to do list of course and I may have talked to friends and neighbors about this aspect of these bikes more than any other.  In my research and conversations, I thought I would be tricky and "upgrade" the slingers to r69s.  Little lesson learned here - they do not fit.  The slightly deeper lip, which is why I thought I wanted them, interferes with the bearing carrier by just a tiny bit.  We are talking a couple thousands probably. So, to anyone working on an r69 - the r69 and r69s motors have a few subtle differences and cannot always interchange parts.  To be honest, in the back of my mind I thought this might be true and these slingers were the only place I tried using a later model part #.  Lesson learned, don't do it.

Old below - new on top. You can sorta see the difference... 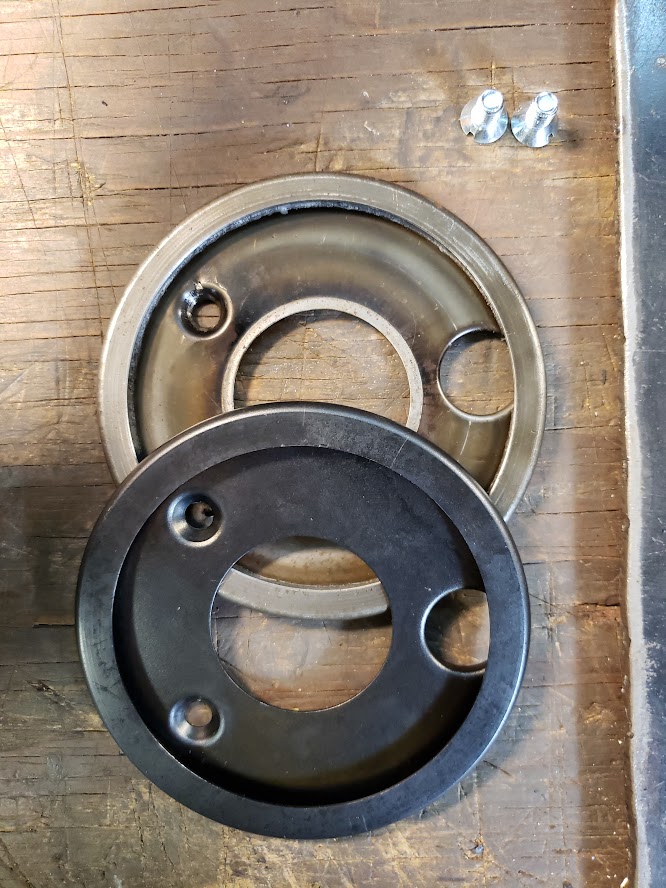 Instead of ordering another set - I decided to service my old ones.  Made this little scraper tool in about 5 min and it worked like a champ. 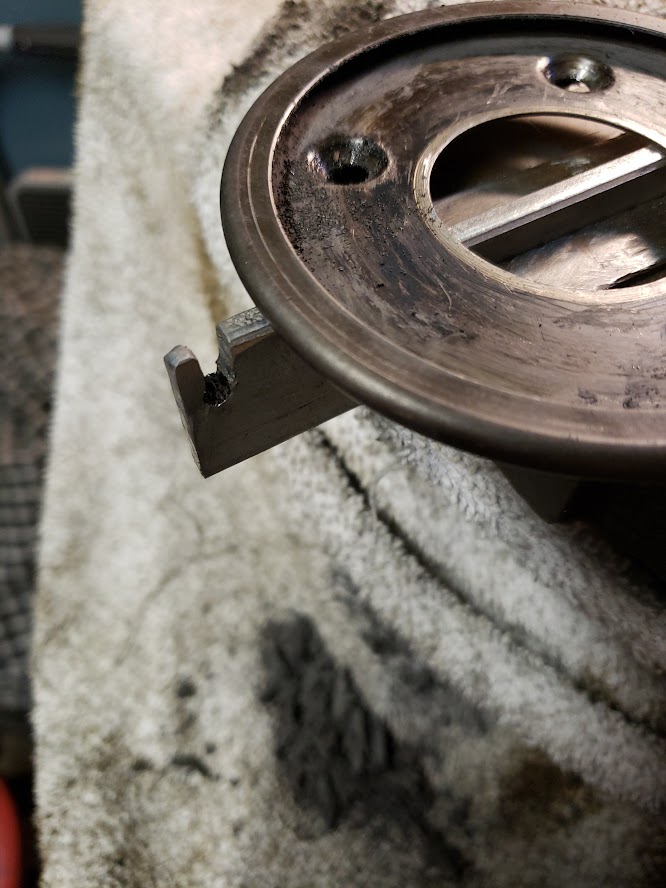 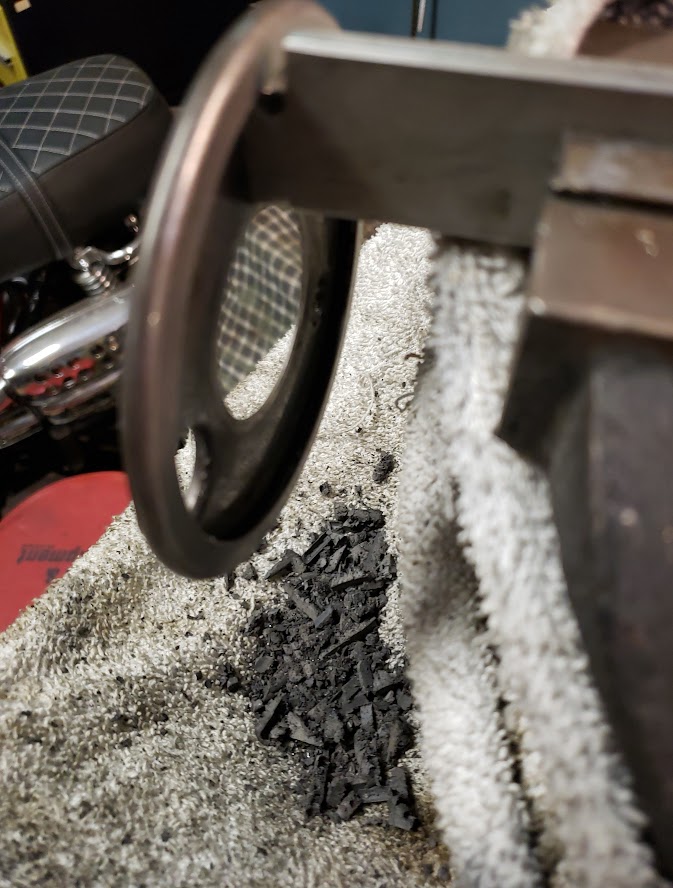 I also opted to not replace the rear "hemispherical" bearing (pt #07119983301).  Instead I'll be using 2 of the front crank bearings (pt #07119981245). Riots may ensue, but to me and others I have spoken with, this is just such an odd bearing design and seems to ask for trouble. The true replacements are also quite expensive, so this is how I roll. The old one makes a cool paperweight. 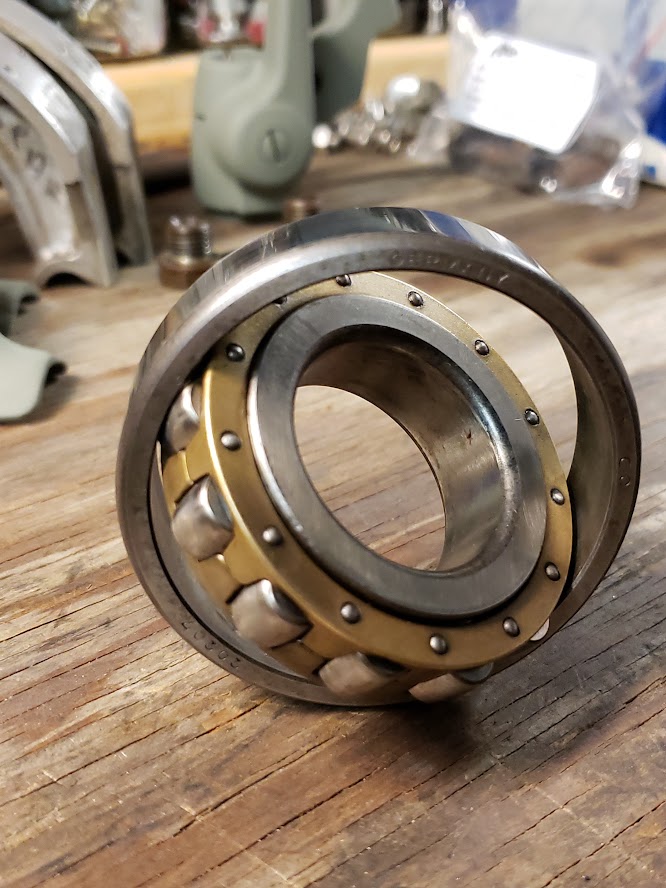 I had a sheared flywheel woodruff key which had to be removed and cleaned as well. The flywheel was still within tolerance runout before disassembly - but timing it would probably have never worked. 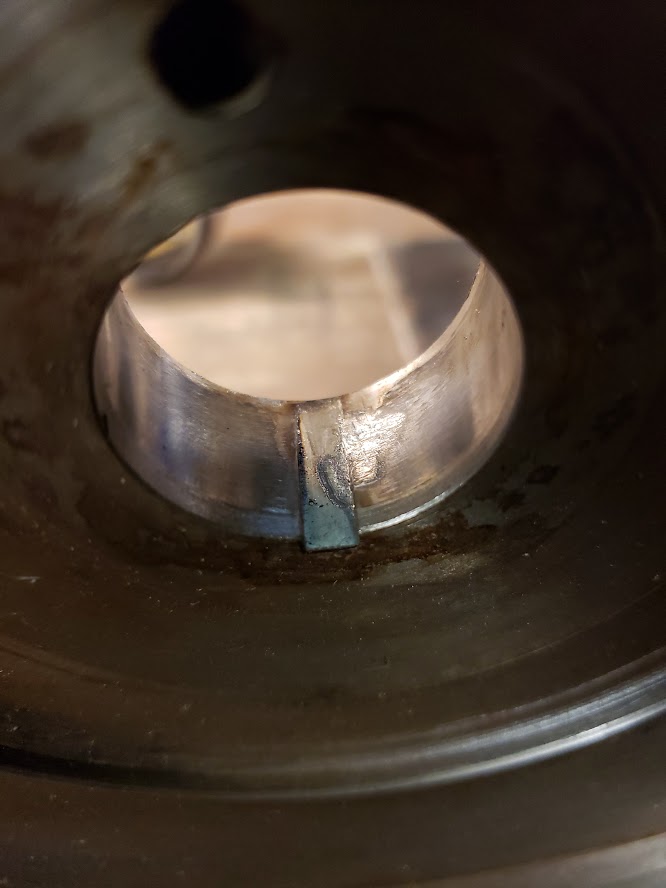 There was a little debate about my rod bearings - but I decided to run them.  After researching the rebuild process - yikes.  The crank overall was within spec and there is minimal (if any) lateral movement on the rods.  If they knock - and I don't expect them to - that will be for another day.  All passages are clear and oil is passing freely. This was another place I almost got my ass handed to me - but after actually FOLLOWING my friends instructions - it came back together. Resetting that rear main bearing can be both so easy and so hard.

And now just for gratuitous photos - because I'm so happy. Feel like a major corner has been turned. 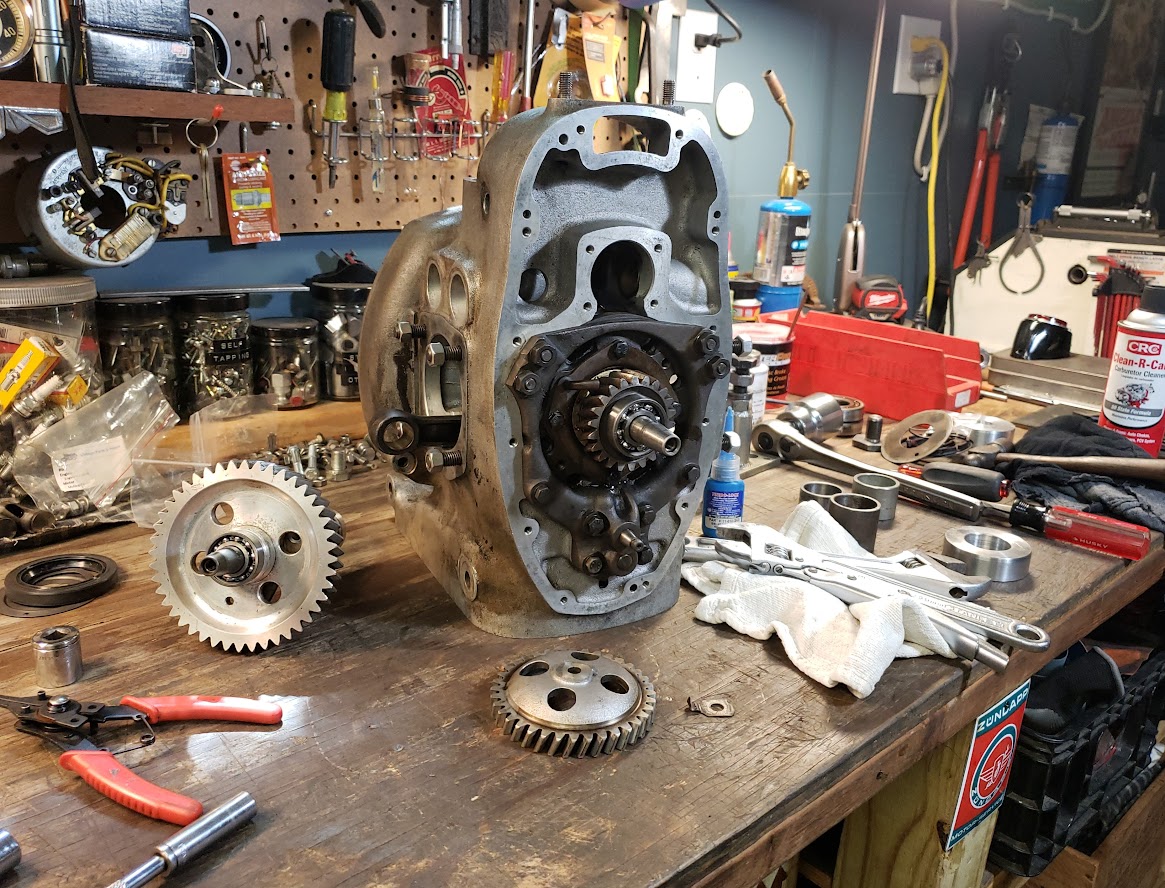 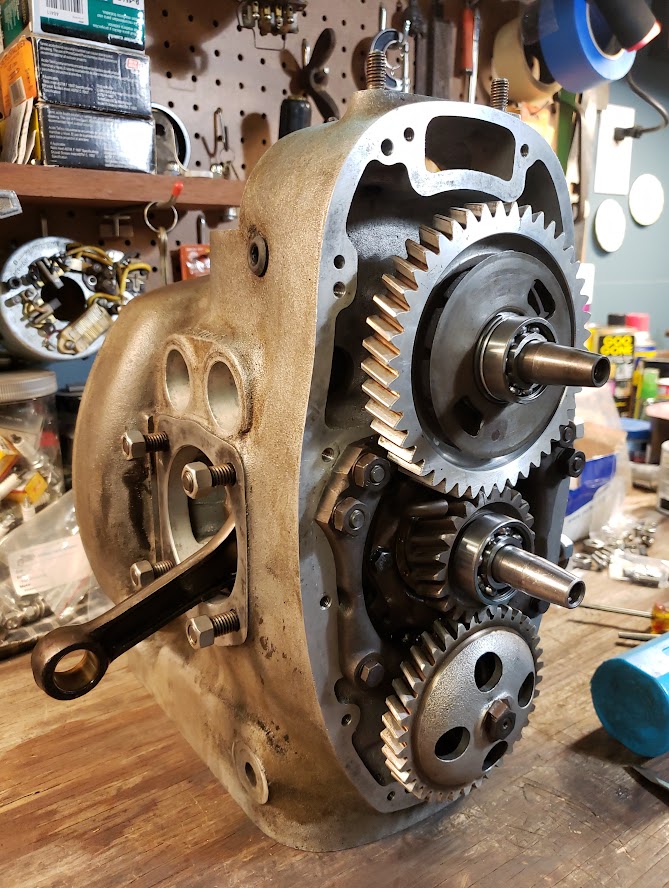 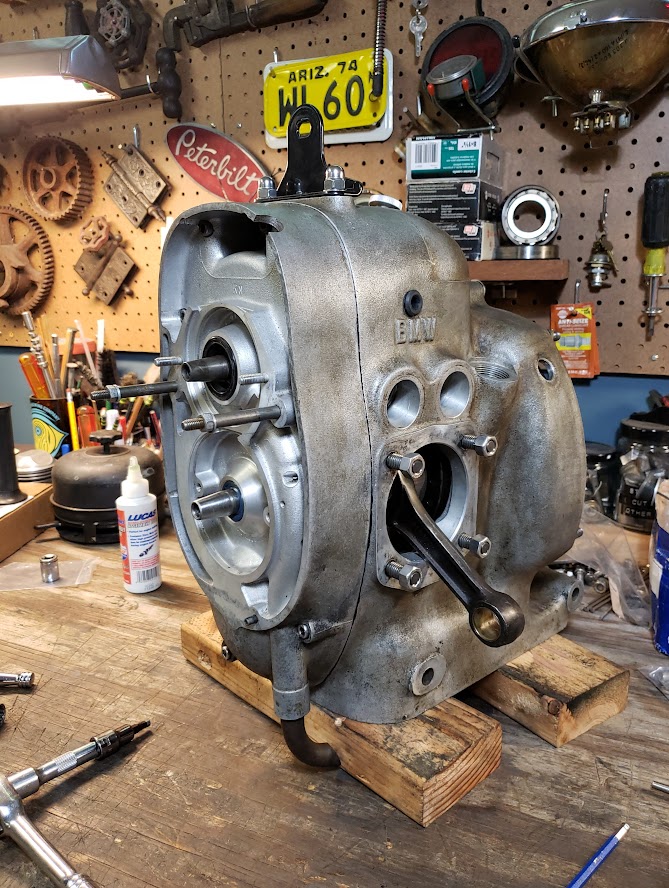 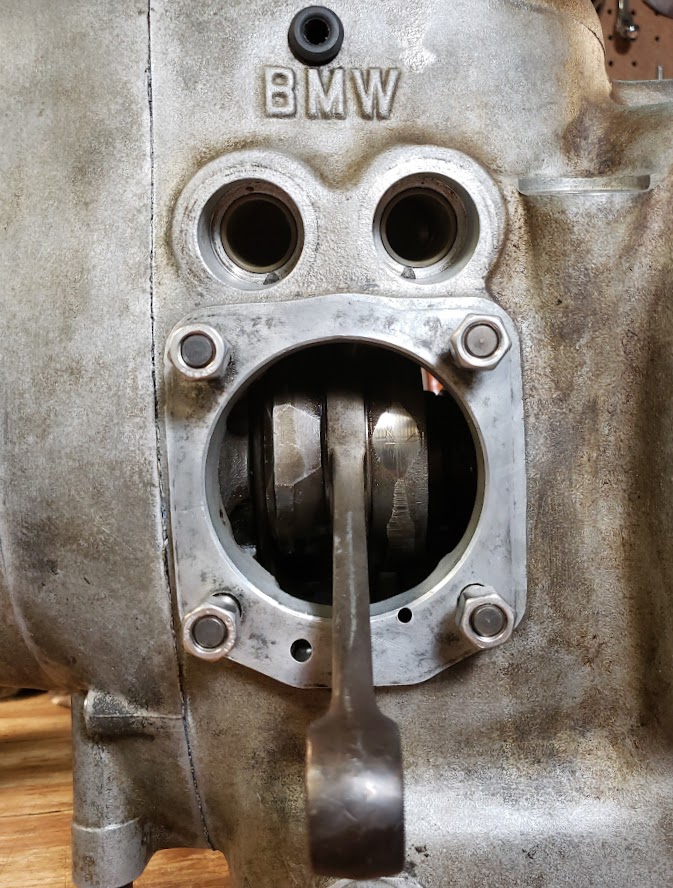 Although way above my pay grade, I am enjoying your progress and great pictures. Keep up the good work.
Top

Thanks FL. Give yourself a raise.

Short update here - thanks to Micha. I knew something felt odd about the way I folded that tab...

The Roller comes together

Kinda the real unveiling as to what this old girl is gonna be. Solid preview anyway...
Mismatch bitsa hodgepodge - call it what you will. 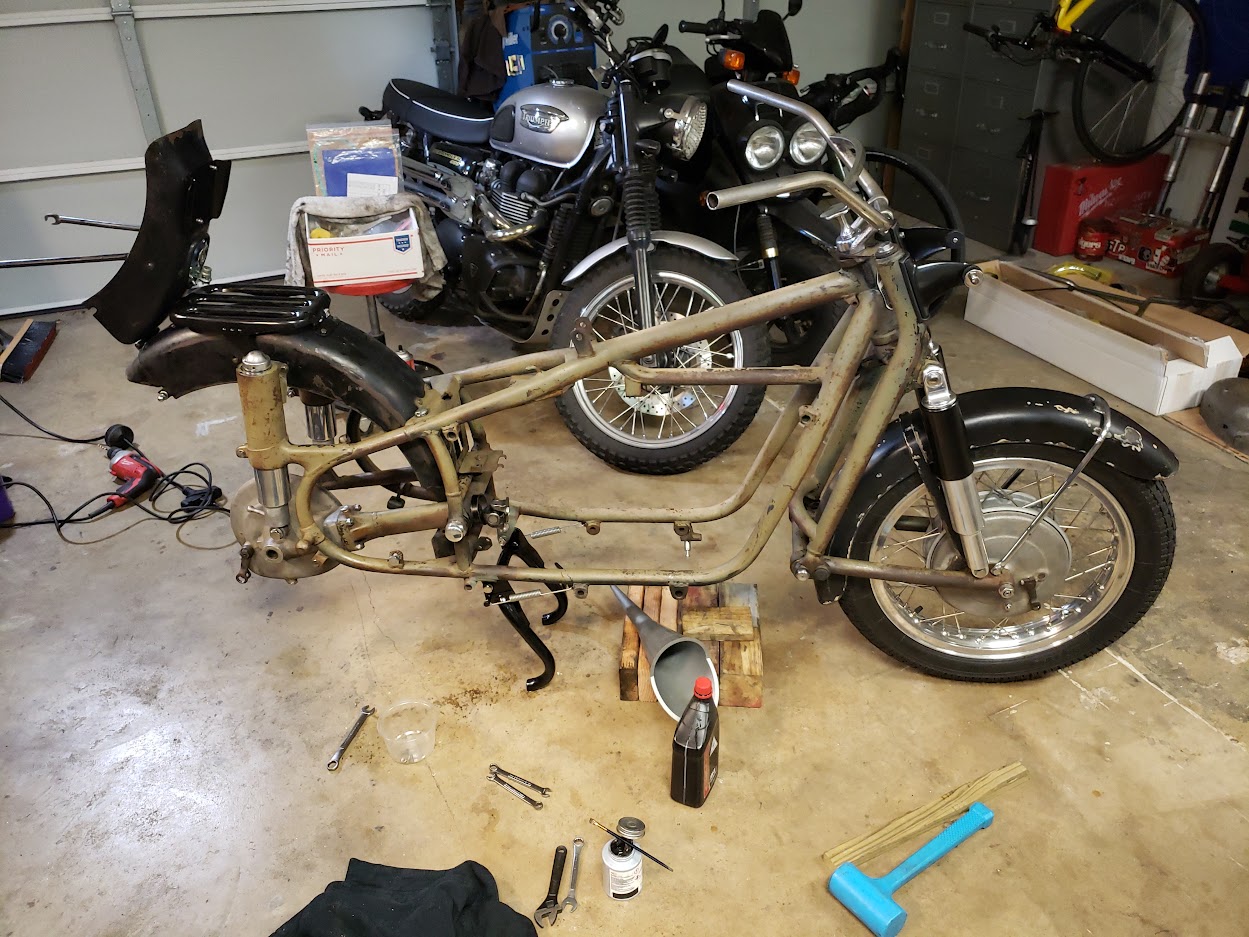 There are at least 5 paint jobs at play here. 3 on the frame alone. I had a "better" tank that I went with, mostly for the pinstripes. Some of the black is new and some is new that I did and some is old as hell. 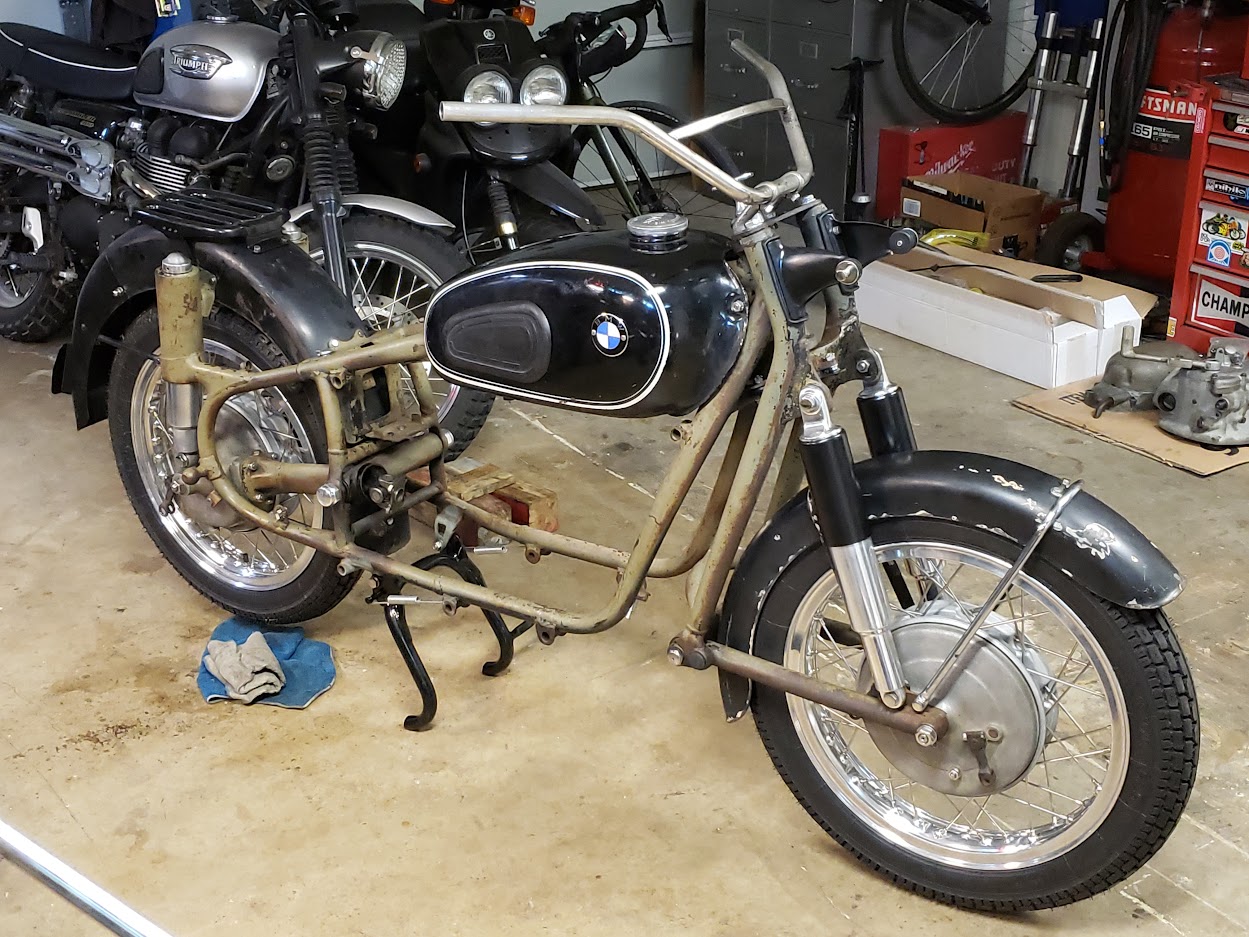 Suspension is fully restored all around with new/old/good absorbers (2 of my originals were blown beyond redemption) plus new silent blocks (as 2 of mine were missing). All bright work redone. I completely rebuilt the steering damper with new friction plates. All new bolts, rebuilt tool compartment door, new rack, and lots of other little things. 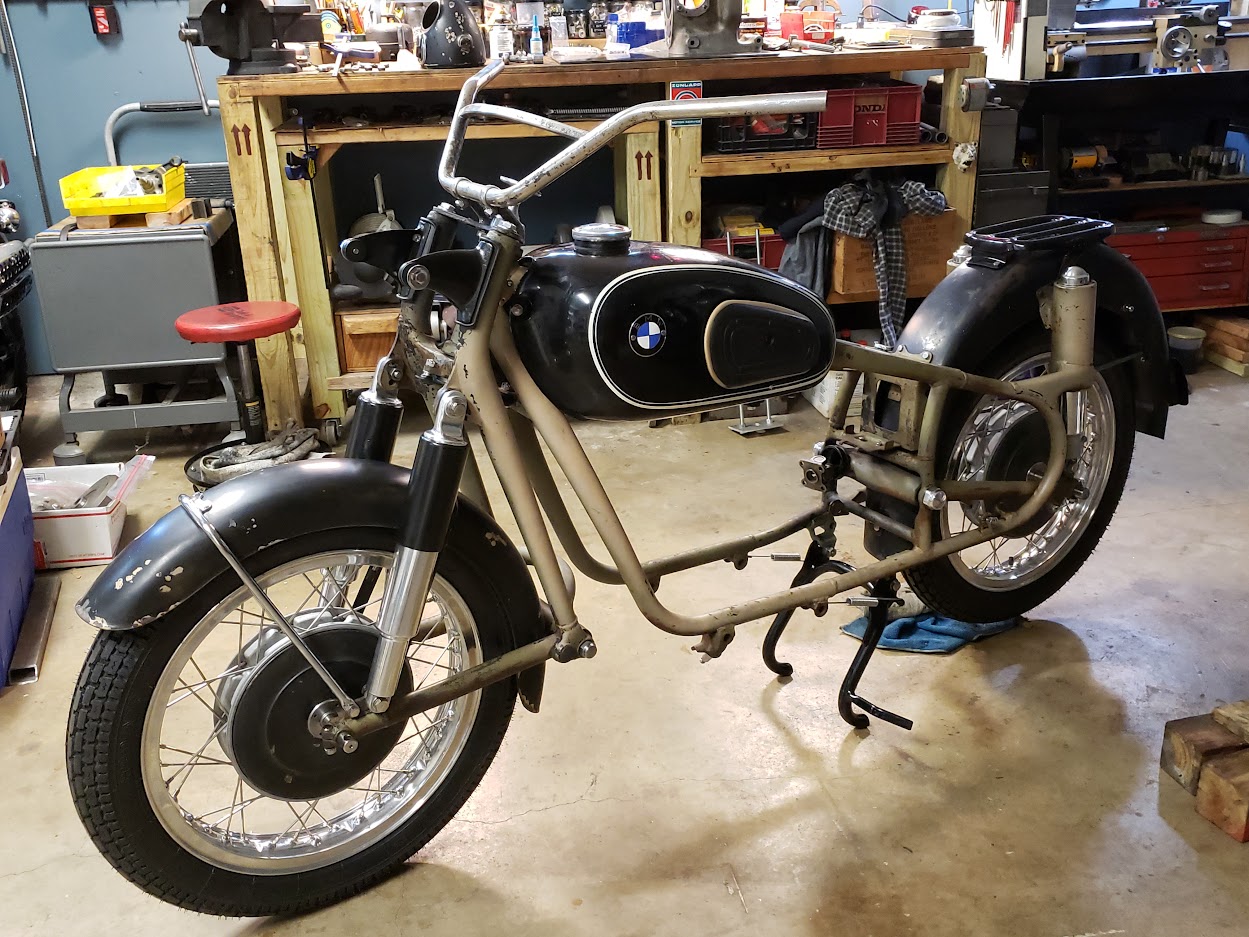 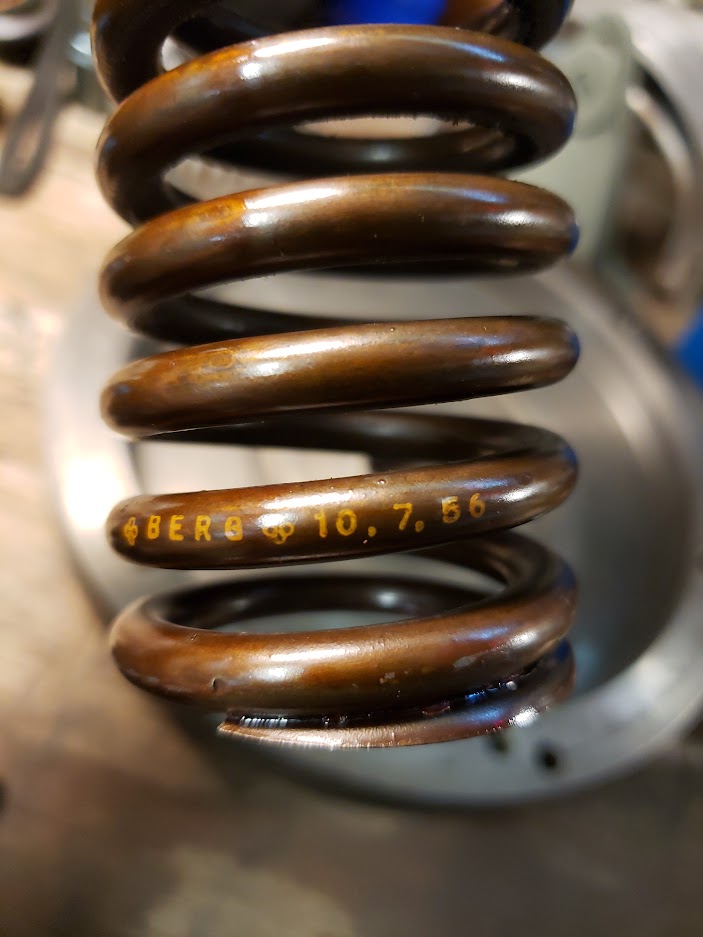 The headlight ears were mismatched and I was able to verify that the smaller non adjustable one is correct.  Amazingly, I found its sister out on ebay one day.  Both needed minor weld and dent repairs, and I ended up painting them just to protect the exposed metal after the fact. 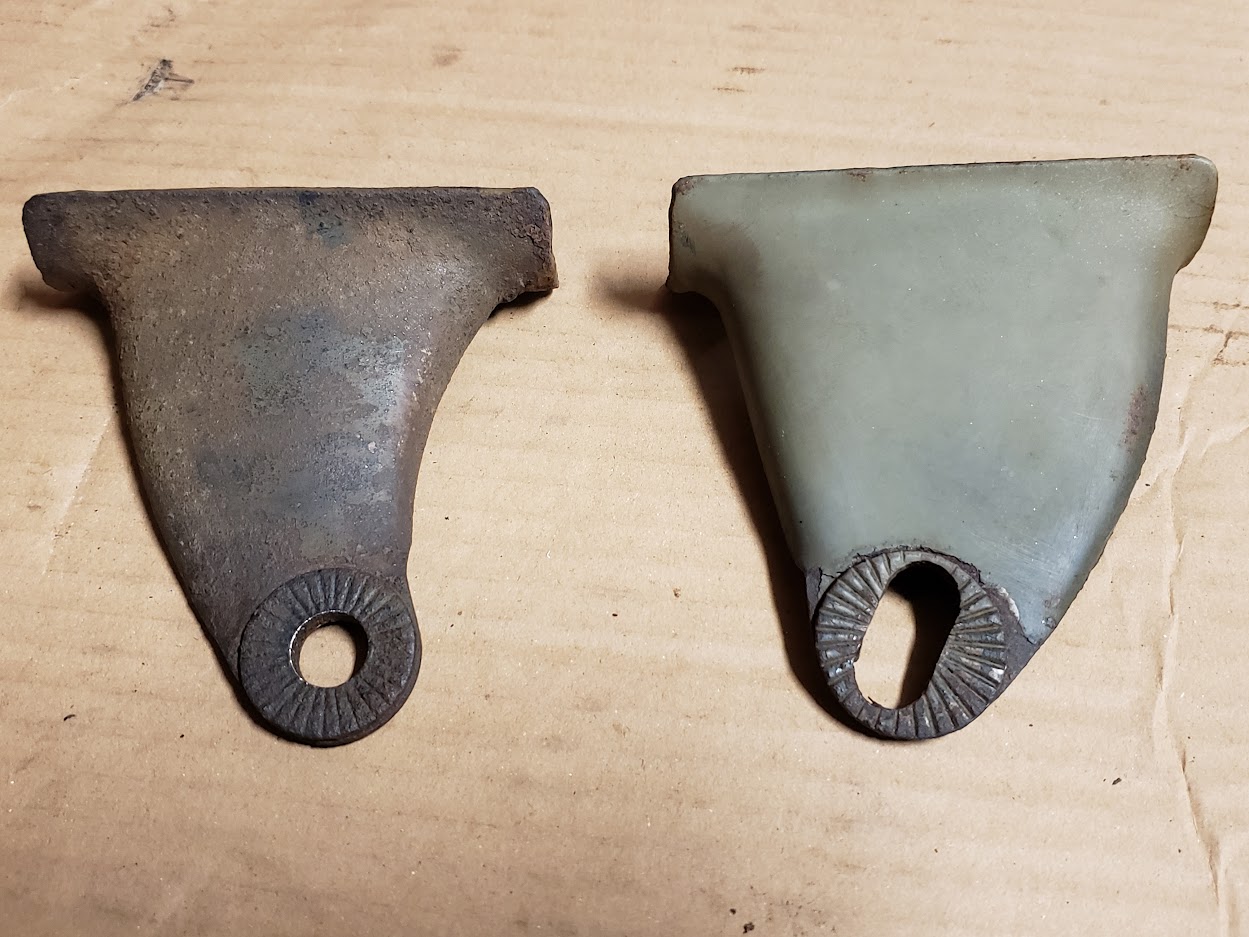 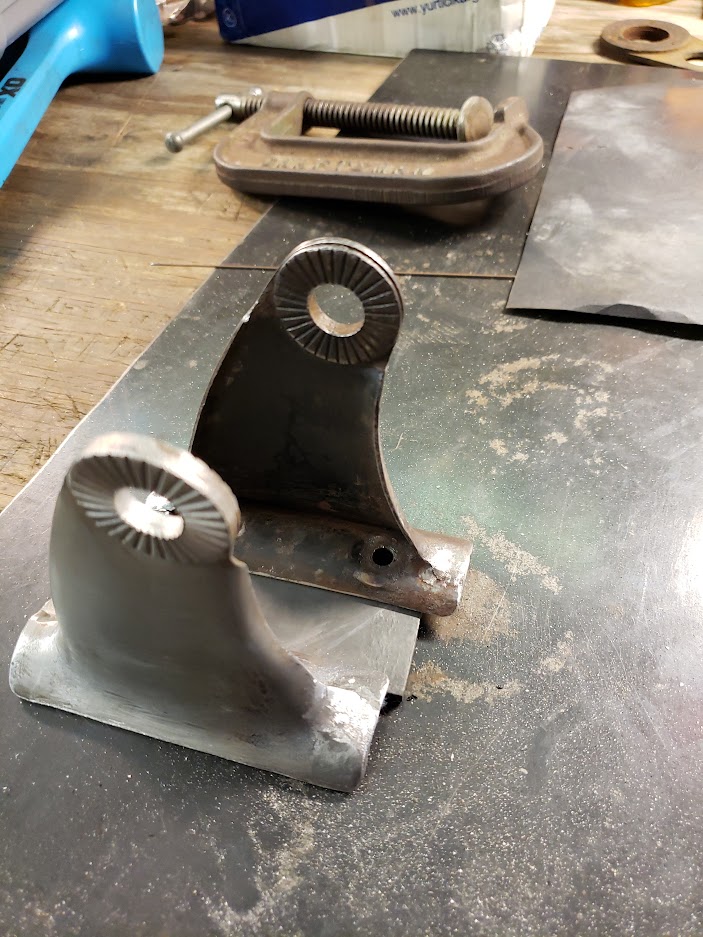 I don't know why - but I kinda like these weird old non stock handlebars.  I think I'm gonna run them - for now.  The left side clutch control was missing when got the bike and this was a real dagger to the heart.  I love old knobs and levers, so living without the signature spark advance control was making me lose sleep.  I tossed and turned.  I posted want ads here and there, and asked many places.  I ultimately ended up doing probably the most over the top thing yet during the course of this whole endeavor.  I bought the lever and a new perch and "made" this.

This basically entailed adjusting the bottom side of the switch housing to better fit the perch contour, and then drilling and tapping some holes.  I did 2, but you might get way with just one.  I have seen an original perch casting with a molded in spot for this lever, so I'm pretty sure mine is not 100% correct.  I also know that having this leaver to advance and retard timing is... maybe not the best idea?  I was given what I think is good advice to leave the cable disconnected, so people who love levers and knobs like me don't monkey with it while it's parked somewhere.  SO - at the end of the day I have a ridiculously expensive clutch control, with a spark advance lever that is close but not quite right, which is really all just for show anyway.  But, weirdly, I am sleeping better...

Since you can't have one nice side and one crap side - I restored the original throttle control to match it.

Also filed in the "not quite right" category is this emblem - which is completely bogus I think.  I've never seen one on any original r69 stuff.  Correct me if I'm wrong, but I think someone made this after the fact and it's not a "real" BMW part.  Whatever it is - I'm gonna use it.  There are no holes in my fender for it, but it's already riddled with extra holes from incorrect tail lights, mis-mounted racks, etc.  I really don't feel guilty about 2 more small holes and I like it. 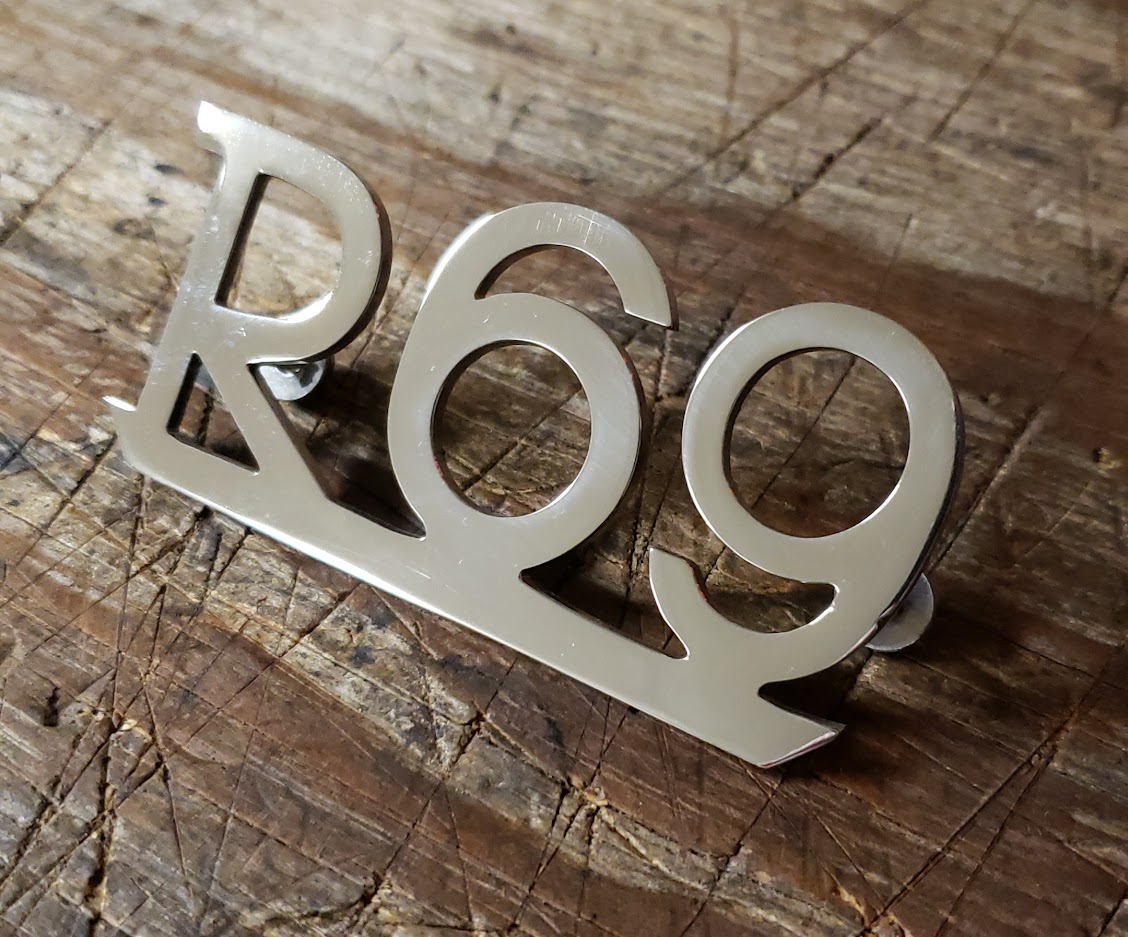